Home > Nutrition > Ginger: Health Benefits, Nutrition, and How to Take It

Ginger: Health Benefits, Nutrition, and How to Take It

Ginger root, the edible portion used for culinary and health purposes, is actually a stem that is found in the soil, called a rhizome. This herb is known for its pungent yet pleasant smell, which stems from two of its chief compounds, namely, gingerol and shogaol. 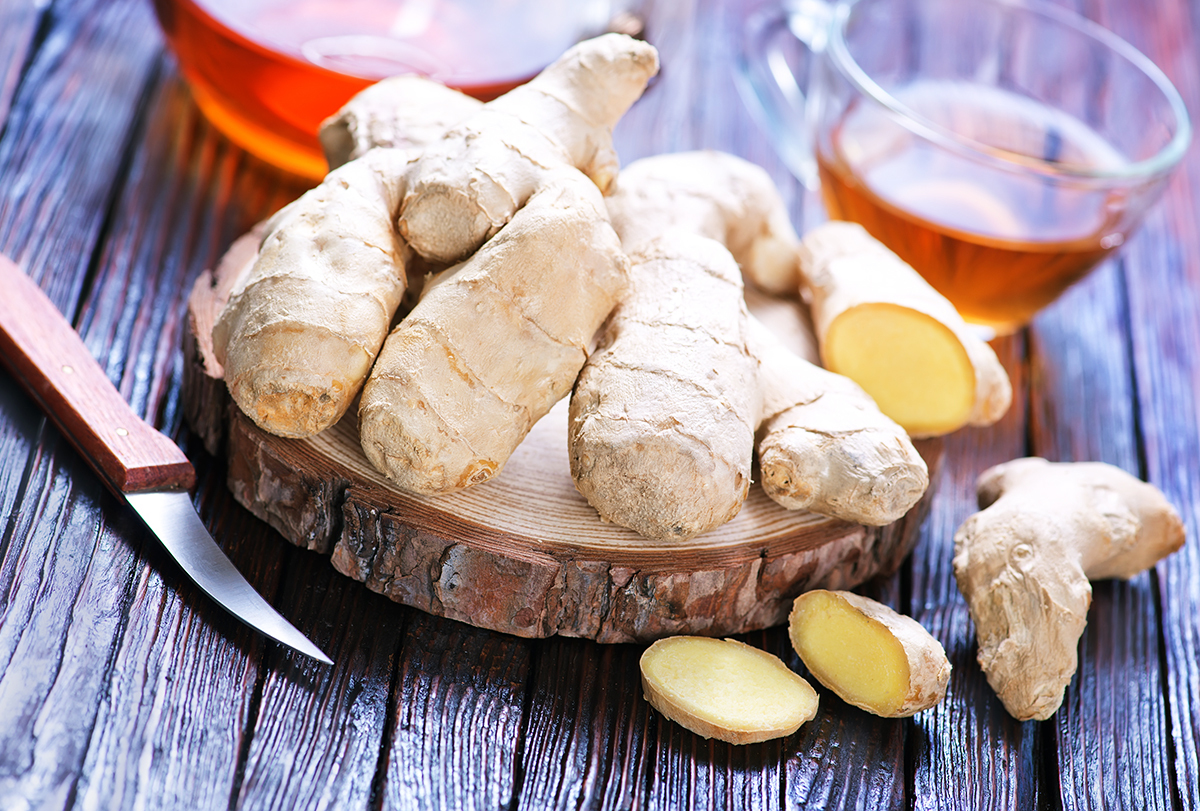 Besides its widespread culinary use, ginger is also credited with considerable therapeutic potential for relieving a wide array of health complaints, such as nausea, coughing, chest congestion, and gastrointestinal distress.

This article will discuss the many uses of ginger, its health benefits, and some recipes that use this popular herb.

Ginger is a good source of vitamins A, B, C, and E, as well as minerals including calcium, iron, magnesium, phosphorus, potassium, sodium, and zinc.

Only 80 calories are found in 100 grams of fresh ginger, along with 2 grams of protein, 1 gram of fat, and 2 grams of fiber. (1) This herb is known to exhibit significant anti-inflammatory, antibacterial, antiseptic, antifungal, and antiviral properties.

Ginger has been used as a medicinal herb for centuries and continues to be an important home remedy.

1. May help with gastrointestinal distress

Ginger works as a digestive aid that can help in breaking down a heavy meal and the faster emptying of the stomach. By relaxing the gastrointestinal muscles, ginger can help relieve abdominal gas and cramping. (2)(3)

More studies are needed to understand how much and what type of ginger should be used to help protect the gastrointestinal system. (4)(5)

The phenolic compounds that make ginger so aromatic – the gingerols, paradols, and shogaols – are powerful antioxidants as well as anti-inflammatory and antimicrobial agents.

All these properties can help fight viral infections such as the common cold and can also help relieve their discomforting symptoms. This herb is known to induce a warming effect inside the body, which can help dissolve the mucus congestion and increase sweating to overcome a cold, flu, and fever.

Ginger is also known to relieve nausea and vomiting. (6) Moreover, ginger functions as a natural analgesic and can reduce the pain or irritation caused by a sore throat, coughing, postnasal drip, and mucus in the lungs.

Vitamin B6 is often used to help with morning sickness and nausea, and ginger works in a similar manner. (7)

Ginger is found to be effective in treating nausea during pregnancy, but more studies are needed to determine the exact efficacy of this herb and appropriate dosage. (8)

Caution: While no studies have found any evidence that ginger consumption increases the risk of harm during pregnancy, it is unknown if and how much ginger is safe for pregnant women. Always consult your doctor before starting any over-the-counter medication, supplement, herbal medication, or tea.

As ginger contains anti-inflammatory and analgesic agents, it can ease the pain and swelling associated with rheumatoid arthritis, osteoarthritis, and gout.

One study found that applying a prepared compress or patch of ginger to the midlumbar region of the back for 7 consecutive days helped control many symptoms of osteoarthritis. (10)

Another study found that the powerful compounds in ginger may help with the discovery and development of new drugs and therapies that relieve symptoms of rheumatoid arthritis and the bone destruction caused by the disease. (11)

As an anti-inflammatory and analgesic compound, ginger has been used to reduce menstrual pain and cramps. (12)(13)

Ginger may also help reduce the volume of menstrual flow, especially during the first 3–7 days. (14) Also, this therapeutic herb may help improve your mood and relieve other physical and behavioral PMS symptoms before and during menstruation. (15)

You can take this herb in the form of tea or capsules, but only in recommended amounts.

There is evidence to support that ginger may help relieve migraines and other discomforts associated with it, both in children and adults. (16) It does so by reducing the inflammation in blood vessels and blocking the pain felt during headaches and migraines. (17)

Ginger can also provide some relief to dizziness and nausea often suffered as a side effect of the migraine. The medicinal intake of ginger may not only reduce the severity but also the frequency of migraine attacks.

Ginger can lower cholesterol levels, prevent blood clots, and lower blood pressure, all of which reduce the overall risk of heart disease. (18)(19) Ginger does help in maintaining cholesterol levels. However, for a healthy heart, you cannot ignore the importance of a healthy lifestyle and diet.

Ginger contains multiple compounds that may help suppress allergic reactions, fight inflammation of the airways, improve asthmatic reactions, and fight respiratory viruses. This is largely due to its anti-inflammatory and antimicrobial properties.

Ginger helps curb the inflammatory response in the respiratory airways triggered by an allergy, infection, or asthma to restore normal breathing.

One study found evidence that fresh ginger can help fight the plaques in the airway that are caused by human respiratory syncytial virus (HRSV), a leading cause of respiratory infections, but found dried ginger to be ineffective. (20)

As more research is done on this herb, more potential benefits are being discovered. Here are a few interesting ways that ginger may help your health:

How Ginger Is Used

Ginger has many different uses and applications. Because ginger has a peppery, warm, and slightly sweet taste as well as a strong aroma, it has been popular for many centuries and used in various ways.

Ginger can be eaten raw or cooked safely, although many people prefer the cooked form, as raw ginger can have a strong, spicy taste. Fresh ginger is often used to make ginger tea, ginger ale, and other beverages. The dried, ground, powdered, and preserved forms of ginger are traded internationally.

Ground ginger as a cooking ingredient is used around the world. It is also used in food processing as a flavoring agent. Ginger can also be found often in baked goods and desserts. Preserved ginger is also often used in baked goods, candies, jams, and marmalades.

How to Store Ginger

Ginger is a staple in many kitchens around the world. If stored properly, it can last for quite some time. Fresh ginger can be kept for up to 3 weeks in the refrigerator if unpeeled.

Keep ginger powder in a tightly sealed glass container. Store this bottle in a cool, dry, and dark place, such as a pantry. It can also be stored in the refrigerator for about 1 year.

The essential oil from ginger has the characteristic flavor and aroma of the herb but is not as pungent. It is often used to flavor beverages and as an ingredient in candy, cosmetics, perfumes, and pharmaceutical applications.

Ginger extract is just as pungent as fresh ginger and works as a substitute for ground ginger. It is mainly used to flavor drinks and manufacture pharmaceuticals.

Although ginger is generally recognized as safe and is widely used in cooking and baking, certain people should exercise caution when taking ginger supplements or consuming a lot of ginger.

Here are a few important considerations to avoid any unforeseen reaction to the medicinal use of ginger:

Is it advisable to drink ginger tea every day?

It is safe to drink ginger tea every day, but most experts recommend that you do so in moderation (2 cups maximum). The reason is not that ginger tea is harmful, but that it can cause unpleasant side effects, such as heartburn and upset stomach.

Can ginger tea be taken on an empty stomach?

Ginger tea can be taken on an empty stomach. However, doing so can increase the risk of an upset stomach.

Should ginger be consumed in raw or cooked form?

Ginger can be consumed either raw or cooked. However, some individuals prefer cooked ginger as the raw form can have a very overpowering taste.

What are the benefits of including ginger in your diet?

About Mr. Jonathan Valdez, MBA, RDN, CSG, CDN, CCM, CDE, ACE-CPT: Jonathan is the owner of Genki Nutrition and is the media spokesperson for the New York State Academy of Nutrition and Dietetics.

Ginger is a well-loved herb that is used in cooking, baking, and beverages around the world. It has a reputation for soothing an upset stomach and aiding digestion.

Ginger is also known to help relieve sore throat, chest congestion, and the pain associated with arthritis, migraines, and menstruation. Ginger is low in calories but high in many nutrients and compounds, making it a healthy addition to meals and beverages.