Cinnamomum is a genus of over 250 evergreen trees and shrubs known for their soft, fragrant, and flavorful bark. 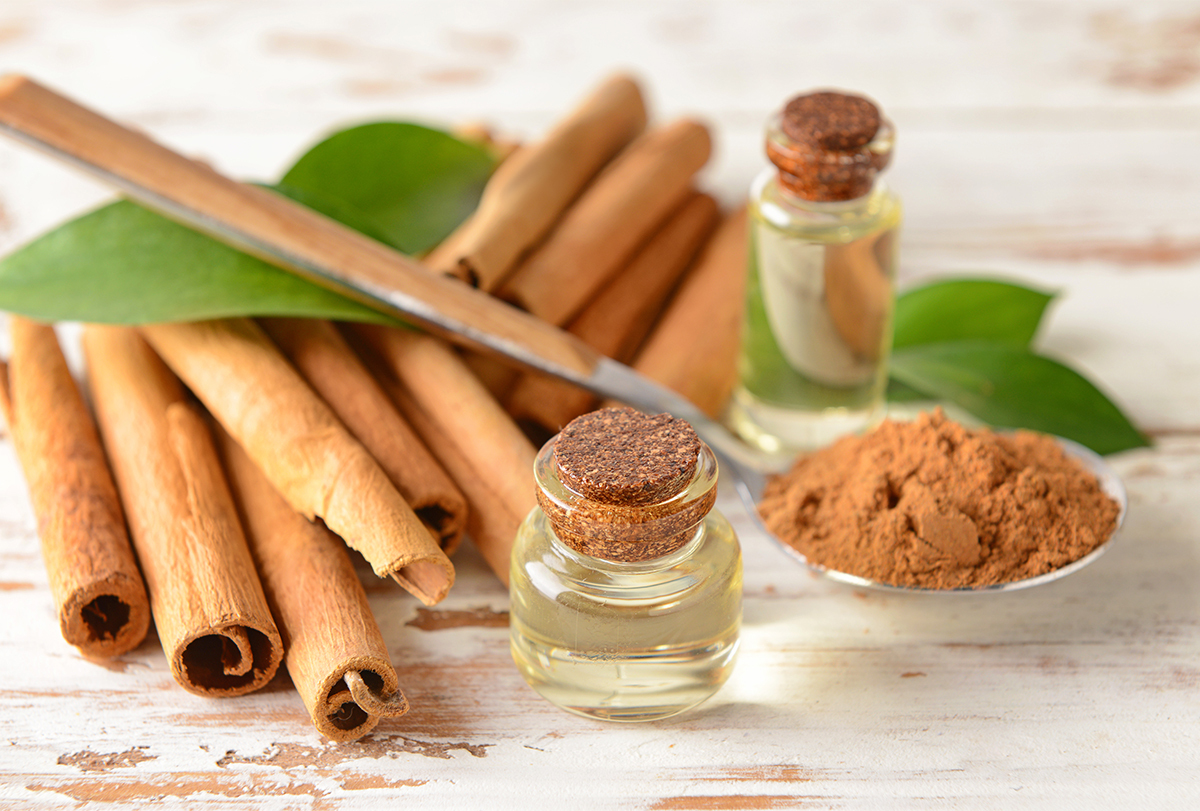 Cinnamon is made up of over 80 fragrant chemicals that combine to produce a unique aroma that is described as sweet, savory, and spicy.

The bark of the tree contains cinnamaldehyde, an essential oil that is mainly responsible for the cinnamon flavor and aroma. The bark is often ground into a powder and used as a spice in cooking. Alternatively, the bark may be rolled into cinnamon sticks.

Cinnamon contains fiber, vitamin K, calcium, iron, and manganese. However, cinnamon is usually eaten in small amounts as a spice in foods. Cinnamon’s health benefits are mostly attributed to its components rather than its essential vitamins and minerals:

The two varieties of cinnamon most often sold in stores are cassia and Ceylon cinnamon.

The two types appear similar when in powdered form. However, when the bark is rolled into sticks, you can see that the cassia bark is made up of one thick layer, whereas the Ceylon bark has multiple thin layers.

When too much sugar is in the blood, it starts to bind with protein and fat, forming compounds that damage blood vessels. The damage contributes to the long-term complications of uncontrolled diabetes, including blindness, nerve damage, and kidney disease.

Cinnamon can help in blood sugar control in the following ways:

More rigorous research is needed to determine the actual efficacy and long-term effects of cinnamon intake for diabetes control.

Consuming appropriate amounts of cinnamon regularly may help decrease insulin resistance and blood glucose levels, but cinnamon is not a substitute for your standard diabetes medicine. Always consult your medical provider before trying alternative and complementary therapies.

Menstrual pain can range from a monthly annoyance to a condition that disrupts everyday activities and hampers your quality of life.

Cinnamon has been shown to reduce menstrual pain. However, it is not as effective as conventional treatment using anti-inflammatory drugs.

Preservatives added to food help increase shelf-life and safety by preventing bacterial growth. The essential oils in cinnamon have antibacterial effects and can be used for food preservation. (12)

Its use can improve food safety without increasing the number of unnatural chemicals in food.

One consequence of treating infections with antibiotics is that the bacteria may adapt and become resistant to medications. Emerging research suggests that the oils in cinnamon could be used with antibiotic drugs to fight drug-resistant bacteria. (13)

Taking cinnamon extract with standard antibiotics can help enhance the effectiveness of the drug so that you can treat infections with smaller doses and thereby reduce the risk of side effects and the development of drug-resistant bacteria.

Most of the damage to blood vessels is due to underlying inflammation, which in turn paves the way for heart disease. The anti-inflammatory oils and antioxidants found in cinnamon can help mitigate cardiovascular damage.

Moreover, cinnamon is known to promote the production of nitric oxide (NO) by body cells. This gas has a relaxing effect on blood vessels, which helps them expand and carry more blood with reduced pressure. (14) However, these heart benefits have only been observed in animal studies, which need to be corroborated by more extensive human trials.

Cinnamon intake can help preserve your heart health by bringing down inflammation and blood pressure, which are both contributors to cardiovascular damage.

Researchers are beginning to recognize the cancer-fighting potential of cinnamon. Studies on animals show that cinnamaldehyde and eugenol prevent cancer growth in the following ways: (15)

However, there are no human studies that demonstrate that cinnamon is safe or effective in treating or preventing cancer. Further research is needed before cinnamon can be recommended for cancer treatment.

Researchers hypothesize that cinnamon could be used as an alternative or complementary cancer therapy to facilitate cancer cell death, curb body inflammation, and bolster the immune system.

Neurodegenerative diseases, such as Alzheimer’s disease and Parkinson’s disease, are characterized by the loss of healthy nerve and brain cells. Neurotrophic factors are molecules that promote nerve cell health and growth.

Cinnamaldehyde has been shown to increase neurotrophic factors in the nervous system of mice. (16) However, further research is needed to see if this effect can be replicated on human subjects.

Note of Caution When Using Cinnamon

Take the following precautions before using cinnamon for its various proposed health benefits:

Coumarin is a natural flavoring found in cinnamon. Isolated coumarin cannot be added to food products because it is known to cause liver damage and increase the risk of cancer.

In small amounts, coumarin does not cause health problems. It is generally considered safe to consume 0.05 mg of coumarin per pound of body weight per day.

This means that a 120-pound person could eat 2 g of cassia cinnamon per day without side effects. Approximately 2.7 grams of cinnamon is equivalent to 1 tsp.

Cinnamon is safe for pregnant women when consumed in small amounts.

Coumarin is a known blood thinner. When coumarin is taken at the same time as other blood-thinning medications, the risk of bleeding increases.

Cinnamon should be consumed cautiously if you take other blood-sugar-lowering drugs such as metformin or insulin. Hypoglycemia is caused by dangerously low blood sugar levels and can be fatal.

Always consult a medical provider before using cinnamon supplementation if you take medications that affect blood sugar. The amount of cinnamon used as a spice in food is usually considered safe.

Cinnamon can cause allergic reactions, particularly if consumed in large amounts. Reactions can be mild or severe depending on the portion size, duration of exposure, and the individual’s sensitivity.

Seek immediate medical consultation if you experience coughing; wheezing; breathing problems; cold symptoms; swelling in the mouth, tongue, or lips; or a red, itchy rash after eating or touching cinnamon.

Cinnamon in the Kitchen

a. Common uses of cinnamon

With its complex flavor profile, cinnamon has many applications in the kitchen, including savory, spicy, and sweet recipes. These are a few examples of how cinnamon can be used in food:

b. Selection and storage

Cinnamon can be purchased as a powder or rolled sticks. The powder is more convenient for use in baking and has a stronger flavor.

Cinnamon should be stored in a sealed container. Ground cinnamon will stay fresh in a cool, dark, and dry area of the kitchen for about 6 months. Sticks remain fresh for about 1 year.

Cinnamon will become darker in color and lose its sweet aroma with age and it should be discarded once it becomes odorless.

Cinnamon is one of the oldest and most widely used spices worldwide. The essential oils in cinnamon bark not only give cinnamon its distinct flavor and aroma but also offer health benefits.

Cinnamon has been used in traditional medicine throughout history. Modern researchers are beginning to recognize its therapeutic potential for a variety of diseases and ailments.