Nutrients That Keep Your Lungs Healthy

Dietary micronutrients or phytochemicals with potent antioxidative or anti-inflammatory activities are promising agents for the preservation of lung function, and the majority of current studies are focused on their protective effect in adulthood and old age. 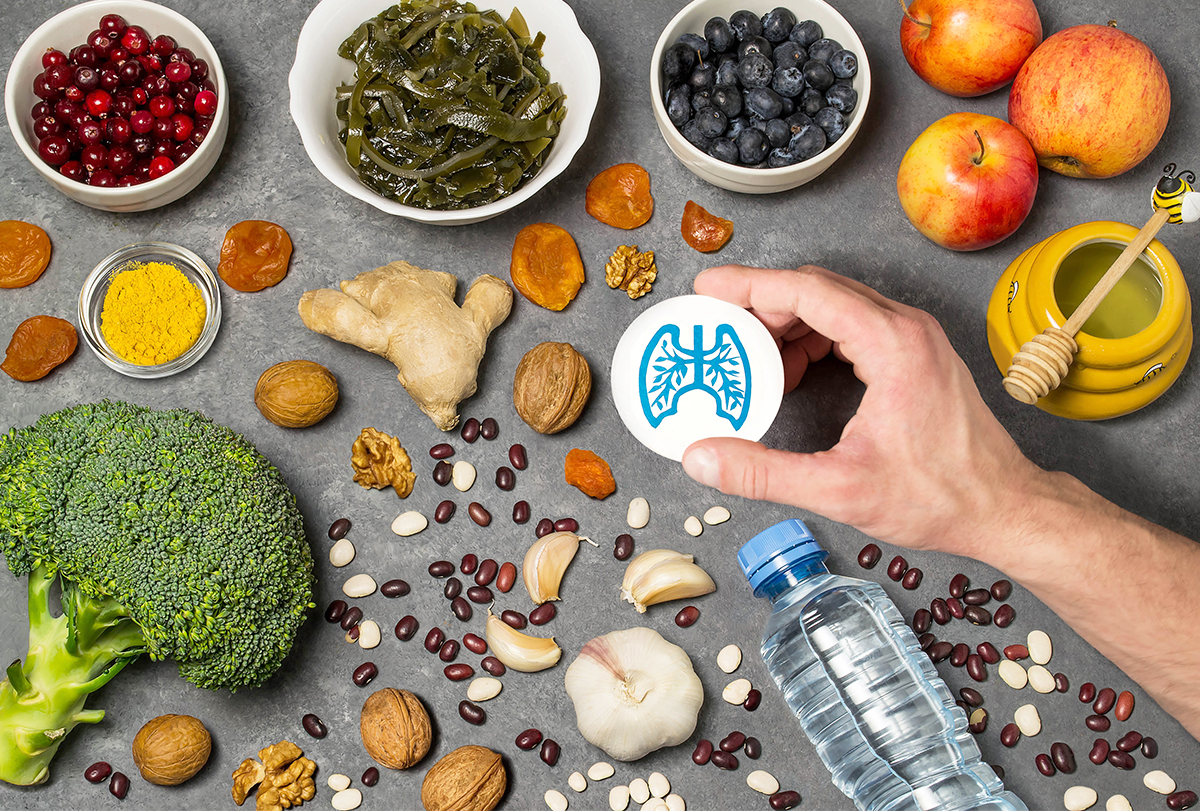 Due to the various categories and potent antioxidative properties of phytochemicals, future studies are warranted to clarify their potentially different outcomes and underlying mechanisms.

Carotenoids may help improve the symptom pattern of lung disease, while lycopene, flavonoids, and vitamins C and E may help reduce its progression rate. (1) Diet and nutrition are increasingly becoming recognized as modifiable contributors to chronic disease development and progression.

Fruit and vegetable intake is highly associated with respiratory health due to the benefits of antioxidant vitamins (C, D, E, and ß-carotene), minerals (magnesium, calcium, selenium, and potassium), dietary fiber, and phytochemicals.

Beneficial Nutrients for the Lungs

Here are some key nutrients that are good for your lungs:

Omega-3 fatty acids, primarily EPA (C20:5) and DHA (C22:6), found in oily fish and seafood, have been shown to interfere with the body’s inflammatory response and may ward off some of the inflammatory mechanisms involved in the physiopathology of chronic obstructive pulmonary disease (COPD), asthma, and obstructive lung disease.

Omega-3 polyunsaturated fatty acids (n-3 PUFAs) possess anti-inflammatory and anti-allergic properties and may thus be beneficial to lung health. They are present in fatty fish, marine oils, and other marine foods. (4)

Vitamin C has anti-inflammatory, anti-asthmatic, and antioxidant effects that can help your lungs function better, reduce or repair lung damage, and facilitate better oxygen supply in the body.

ALSO READ: How to Meet Your Recommended Vitamin C Intake

Flavonoids are potent antioxidants and have anti-inflammatory as well as anti-allergic actions due in part to their ability to neutralize ROS. (5)

Flavonoids are widely distributed throughout the diet and are found in fruits, vegetables, nuts, seeds, stems, flowers, roots, bark, dark chocolate, tea, wine, and coffee. There is evidence of the benefits of dietary flavonoids in asthma development and progression. (6)

Flavonoids are secondary metabolites from polyphenolic plants with significant antioxidative activities. Intake of flavonoid-rich herbal tea was associated with a slower 10-year decline in lung function. Anthocyanin intake was found to have a strong protective effect against age-related lung function decline.

Carotenoids are plant pigments and a group of fat-soluble antioxidants that have been shown to benefit respiratory health due to their ability to scavenge ROS and reduce oxidative stress. (7)

Vitamin D can be obtained from dietary sources or supplementation; however, sun exposure is the main contributor to vitamin D levels.

Recent studies have revealed many new sites of vitamin D and vitamin D receptors (VDRs) in organs, including the immune system, suggesting its potential in defense in inflammatory reactions and infection.

ALSO READ: What is Vitamin D? How Much You Need, Sources and More

Certain essential minerals have also been found to be protective in respiratory conditions. In children, increased intake of magnesium, calcium, and potassium is inversely related to asthma prevalence.

Dietary intake of selenium has been shown to be lower in asthmatics compared to non-asthmatics. (14) Meanwhile, levels of iron were negatively associated with later-onset wheeze in children. (13)

The Role of Nutrition in Patients With COPD

Studies show that asthmatics who were underweight had poorer asthma control than their normal-weight counterparts. (15) Undernutrition is most commonly recognized as a feature of COPD.

Weight loss, low body weight, and muscle wasting are common in COPD patients with advanced disease and are associated with reduced survival time and an increased risk of exacerbation. (16)

The causes of undernutrition in COPD are multifactorial and include reduced energy intake due to decreased appetite, lower physical activity, dyspnea while eating, and depression.

In addition, resting energy expenditure is increased in COPD, likely due to the higher energy demands from the increased work of breathing. Also, systemic inflammation, which is a hallmark of COPD, (17) may influence energy intake and expenditure.

There is promising evidence that nutritional supplementation in COPD is important and can help to alleviate some of the adverse effects of the disease, particularly muscle wasting and weight loss. (13) Lung function decline is related to oxidative stress and inflammatory actions. (19)

Benefits of the Mediterranean Diet in Patients With Lung Conditions

The Mediterranean diet has been found to have protective effects against allergic respiratory diseases in epidemiological studies.

High intakes of olive oil result in a dietary composition that is low in saturated fat although still moderate in total fat.

In children, several studies showed that adherence to the Mediterranean diet is inversely associated with atopy and has a protective effect on atopy, wheezing, and asthma symptoms; adherence to the diet during pregnancy was also protective for persistent wheeze and atopic wheeze in the children at 6.5 years of age. (20)

A strong association has been reported between adherence to the Mediterranean diet and asthma control. (21) Omega-3 polyunsaturated fatty acids (PUFAs) from marine sources and supplements have been shown to be anti-inflammatory through several cellular mechanisms.

The Positive Effect of Alcohol on Lung Health

Brief exposure to recommended alcohol consumption can be healthy for lung function due to the antioxidant effect, especially red wine, for its high polyphenol content (tannins) that may enhance mucociliary clearing, stimulate bronchodilation, and attenuate the airway inflammation and injury observed in asthma and COPD.

However, prolonged and heavy exposure to alcohol impairs mucociliary clearing, may complicate asthma management, and likely worsens outcomes, including lung function and mortality in patients with COPD. (23)

Recently, alcohol intake has been proven to have a U-shaped relationship with COPD mortality. Studies have suggested that alcohol consumption contributes to impaired lung function as an oxidative stressor.

Besides the alcohol dose consumed, the phenolic compounds found in wine were shown as another possible determinant for this U-shape effect, due to their potential as radical scavengers.

Wine drinking has been shown to be possibly associated with better lung function, and resveratrol as a typical phenol in wine is being frequently linked to reduced COPD risk. (24)

Diet is a readily modifiable factor, and the diet of patients with COPD is often deficient in nutrients such as fiber. The metabolism of dietary fiber by gut microbiomes produces anti-inflammatory short-chain fatty acids (SCFAs), which could protect against inflammation in the lungs.

By addressing the “fiber gap” in the diet of patients with COPD, this targeted dietary intervention may reduce inflammation, both systemically and in the airways, and value-add to the paradigm shift in a more considered diet, which includes the frequent intake of vegetables, fruit, cooking/dressing oil, cereals and legumes, whole grains, rice/pasta, fish, low-fat dairy, poultry, and water – which is considered a “prudent diet.” (25)

Recent research has revealed an inverse relationship between dietary patterns consistent with a prudent diet and the risk of COPD. The gut holds 99% of the commensal bacterial mass of the human microbiome, primarily involving the colonization of the small intestine.

These bacteria produce metabolites and ligands, which directly aid in digestion while indirectly regulating the immune system and inflammation. The absorption of these bacterial products into the circulation induces systemic effects on the host by the gut microbiome.

Protective nutrient interventions among smokers are likely to mitigate the effects of cigarettes on lung health. (10)

The prudent healthy diet rich in vegetables, fruits, fish, and whole grains is associated with better lung function, especially in men who smoke. Thus, in addition to the avoidance of smoking, a healthy dietary pattern could preserve lung function in smokers. (26)

Dietary antioxidants may have beneficial effects on respiratory health. Antioxidants may also be important in asthma during pregnancy, as while oxidative stress commonly increases during normal pregnancies, it is heightened in women with asthma. (13)

Carotenoids are well known for their antioxidative properties. α-Tocopherol is a form of vitamin E, which helps maintain the integrity of membrane fatty acids by inhibiting lipid peroxidation. (27)

Low Vitamin D Levels in Children Are Bad for Their Lungs

A whole-foods approach to nutrient supplementation – for example, increasing intake of fruit and vegetables – has the benefit of increasing intake of multiple nutrients, including vitamin C, vitamin E, carotenoids, and flavonoids, and shows promise in respiratory diseases in terms of reducing the risk of COPD and incidence of asthma exacerbations.