Moles, also known as nevi, are painless skin lesions that develop due to a buildup of melanocytes (pigment-producing cells in the skin) at a particular spot. They are darker than the surrounding skin, but their shade can vary depending on the concentration of melanocytes at the site. 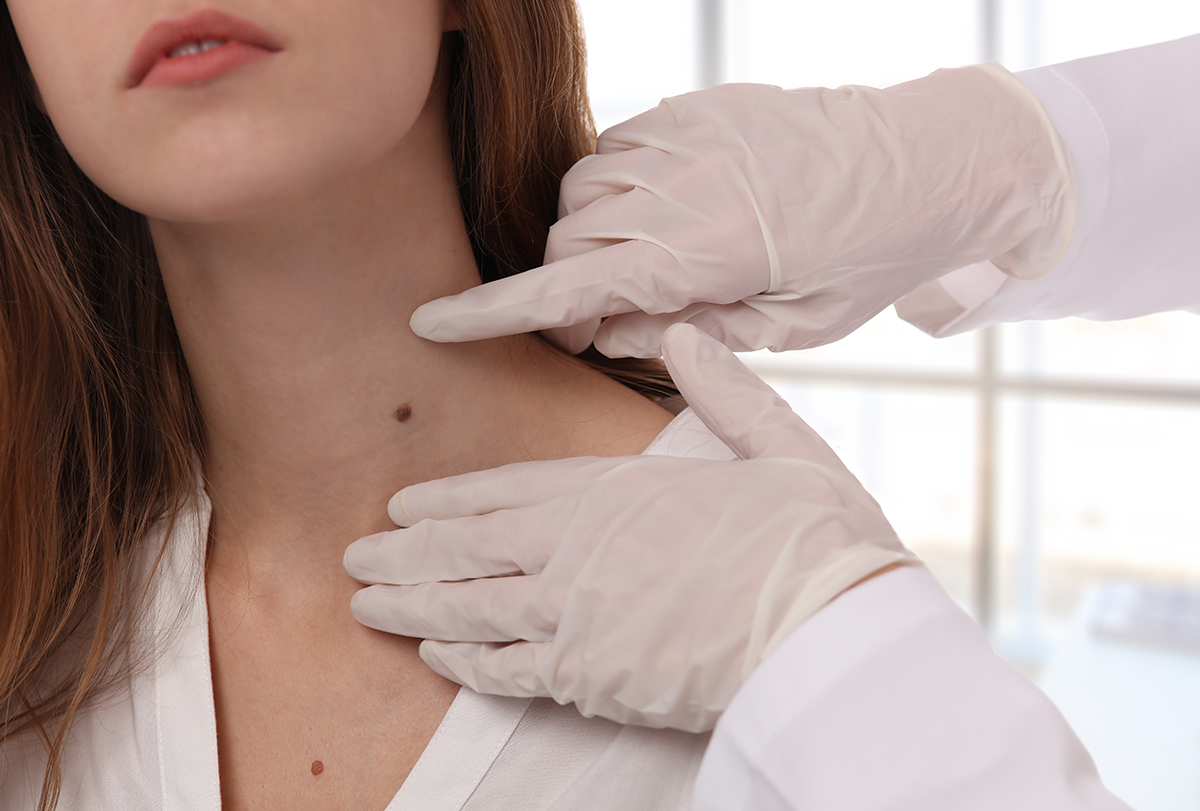 Moles can be of different shapes or sizes and can occur anywhere on the body. If a mole develops irregular edges, grows in size, or changes its color, texture, or shape, it could be cancerous and needs to be checked by a doctor as soon as possible. Thus, you need to monitor your mole for any such abnormal changes so that you can get tested and treated before it advances to a serious condition.

Otherwise, these hyperpigmented blemishes do not pose any threat to your health and are only considered a beauty concern. Many moles resemble a melanoma or skin cancer lesion but turn out to be completely harmless upon testing.

This article discusses the various types of moles, the medical treatments available for their removal, and some complications that warrant medical care.

How Common Are Moles?

Everyone is likely to develop at least a few moles during their lifetime. The average count ranges from 5 to 20, but it can increase to 40 moles per person, which is also completely normal. (1)

The various types of moles are as follows:

Congenital nevi are moles that you are born with. People with congenital moles are at an increased risk of developing melanoma or skin cancer.

Atypical nevi are so called because they are abnormally larger than typical moles. Like congenital nevi, atypical moles can also turn cancerous later or increase your risk of melanoma.

The tendency to develop these moles is passed down across generations. This means that if your parents have such moles, chances are you will develop them as well. In fact, people with multiple atypical moles are usually diagnosed with a medical condition called familial atypical multiple mole melanoma (FAMMM) syndrome.

These moles can develop anywhere on the body, but mostly on the torso and rarely on the face.

Spitz nevi are elevated dome-shaped moles that bear a close resemblance to melanoma lesions. They are mostly pink in color, but can sometimes have darker red, black, or brown hues. Spitz nevi are prone to bleeding.

Acquired moles, as the name suggests, are not present since birth but develop later in life mostly due to sun-induced UV damage. These moles rarely turn out to be cancerous and are therefore not considered a medical concern.

These are some common clinical characteristics of moles:

Noncancerous moles don’t really require treatment unless they are located at an uncomfortable spot or are prominent enough to make you self-conscious. In fact, moles are categorized as a cosmetic problem rather than a medical one.

The doctor may recommend the following clinical procedures that help gradually fade the moles by speeding up skin regeneration:

If nonsurgical procedures fail to deliver the desired results, you can get your mole surgically removed.

Your doctor will examine your mole and skin condition along with other relevant factors to recommend the most suitable surgery for you. Here are some of the commonly used ones:

Moles generally don’t require a medical examination or treatment, unless they present a cancer risk.

Moles with a smooth texture and regular borders are almost always benign, but any change in their appearance, size, and texture should alert you to the possibility of cancer. Thus, even if your mole may seem harmless, it is important to keep a check on its form.

Here are the major warning signs of cancer that correspond to the first five letters of the alphabet:

If you notice any of these changes, consult a doctor immediately for a thorough checkup. The doctor will most probably order a biopsy to determine if the mole is malignant or not.

The doctor will also examine the mole itself and estimate a total mole count on your body. The mole pattern on your arms usually indicates how many moles you have on the rest of the skin, so the doctor doesn’t really have to check your entire body. (2)

The following factors can make you more susceptible to developing moles:

Moles are mostly benign, but some can turn malignant and can lead to melanoma or skin cancer. While moles are most commonly associated with skin cancer, they can also increase the risk of other forms of cancer such as breast cancer in females. (6)

Most moles are completely nonthreatening, but you should get them medically examined if:

Moles are extremely common and rarely a health concern, but you must seek medical consultation if they change their shape, size, or color or they increase in number. These markers indicate a malignancy risk, and your moles should be immediately evaluated by a specialist to ascertain if they are cancerous or not.

Some people also choose to get their moles removed for cosmetic reasons, especially if the growth is large or on a very noticeable part of the body.