How to Treat Chickenpox and Prevent It From Spreading

Chickenpox is the disease caused by a virus known as the varicella-zoster virus. Also called varicella, chickenpox is usually mild but can be severe in adults and immunocompromised people. Chickenpox used to be a very common disease in children before the creation of a vaccine. 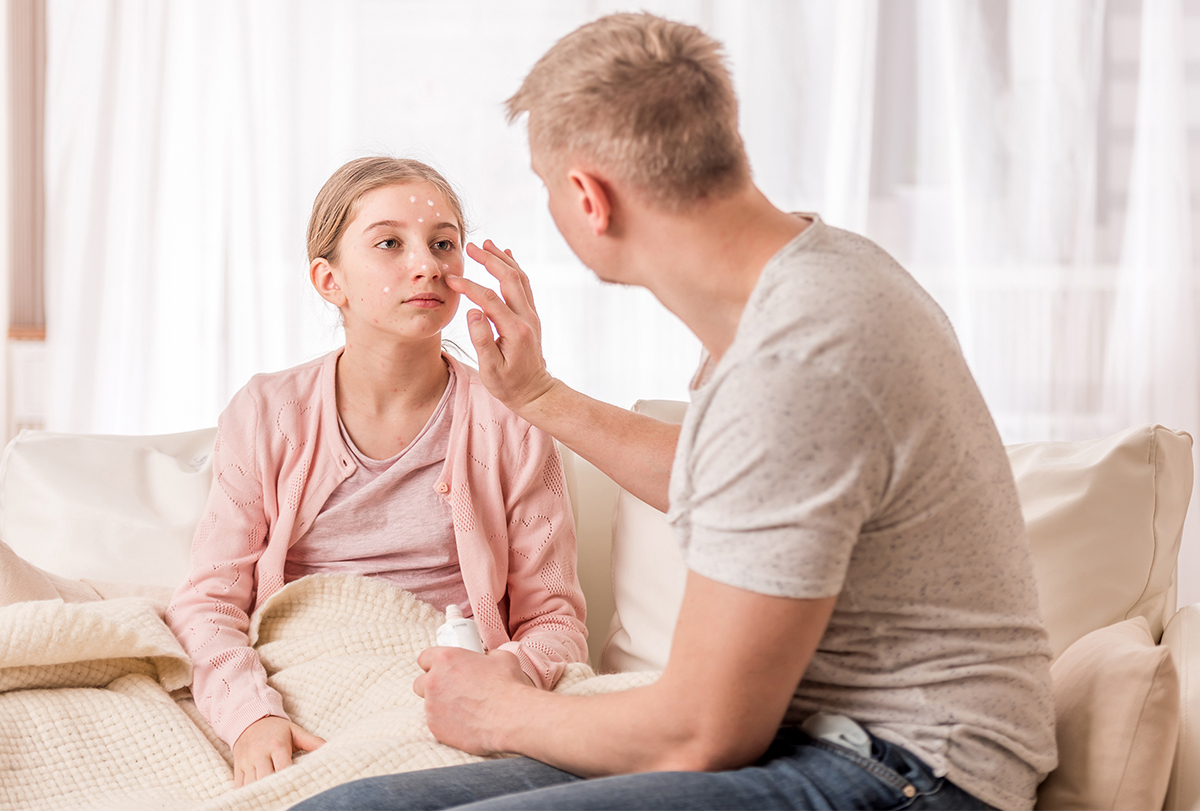 The varicella vaccine was introduced in 1995. Afterward, the rate of chickenpox dropped by 90%. There was also a decrease in complications, hospitalizations, and deaths from varicella. (1) Although the occurrence of varicella has dropped dramatically over the years, sporadic cases still occur.

Symptoms and Complications of Chickenpox

Chickenpox usually presents with a diffuse itchy rash all over the body. The rash develops over several days with crops of vesicles in different stages. It can be preceded by malaise (feeling unwell), sore throat, and fever.

The vesicles usually start to crust after 6 days, but it can take 1–2 weeks for the scabs to fall off. (2)

The symptoms of chickenpox include:

Chickenpox tends to be a mild disease, but it can have complications, especially in children less than 1 year of age, adults, and anyone with a weakened immune system.

The complications of chickenpox include:

Chickenpox is very contagious. Data show that non-immunized people have an over 90% chance of getting chickenpox if they live with someone who is infected. (2)

The virus is transmitted through droplets from sneezing or coughing. You can also get infected by coming into direct contact with the fluid from the vesicles. (2)

The incubation period of the virus is from 10 to 21 days. A person is considered to be contagious from 1 to 2 days before the rash starts until all the lesions have crusted over.

Given the benign course of chickenpox in children, it is usually treated symptomatically. Antihistamines such as Benadryl can be used for itching. Avoid scratching the lesions to prevent infections and scarring. Tylenol can be taken for fever.

Patients are treated as long as they have active lesions, but the treatment works best when started within 24 hours. Treatment is usually for 5–7 days or until the lesions have crusted.

In immunocompromised patients and those with complications, the treatment is intravenous acyclovir. These patients are treated intravenously until there are no new lesions and are then switched to oral antiviral medication.

Total treatment is usually for 7–10 days or until all the lesions have crusted over.

Caution: DO NOT USE any aspirin products in children as it can lead to Reye syndrome, which is a serious complication.

The diagnosis of chickenpox is usually made clinically by the patient’s presentation and the appearance of the rash.

Fever and malaise usually begin 24–48 hours before the rash. The rash starts as flat red spots that then evolve into itchy fluid-filled blisters known as vesicles. The patient can see new vesicles popping up for a few days, which eventually crust over.

If there is doubt about the diagnosis, fluid or scrapings from the lesions can be sent for testing. These tests are used to diagnose an active infection. To determine if you have immunity to chickenpox, a blood sample is collected to look for antibodies to the varicella virus.

The Importance of Vaccination

To prevent chickenpox, the first step is to get vaccinated. The current recommendation is two doses of the varicella-zoster vaccine.

People with a prior history of chickenpox or vaccination do not need intervention if they are exposed to varicella. The advice is to monitor for the development of symptoms.

However, in non-immune adults, the recommendation is to vaccinate within 5 days of exposure. This has been shown to decrease the chances of contracting chickenpox by over 70% (4) and to cause less severe disease if the person does get chickenpox.

If there is a contraindication to vaccination, for example, if a patient is pregnant, severely immunocompromised, or allergic to the vaccine, varicella immune globulin can be given to decrease the occurrence of chickenpox.

Can You Get Chickenpox After Vaccination?

Chickenpox can occur after vaccination, especially if you only received one dose of the vaccine. Because of this, the Advisory Committee on Immunization Practices (ACIP) changed the recommendation from one to two doses of the vaccine in 2006. (3)

If a person does get chickenpox after being vaccinated, it will usually result in a milder disease with fewer complications.

Although rare, catching chickenpox more than once can happen. The more common occurrence is the development of zoster, which is caused by the reactivation of the varicella-zoster virus. This is usually seen in patients who are over 60 years old or immunocompromised. A zoster vaccine is available to help prevent this.

As mentioned previously, healthy children usually get a mild disease if they contract chickenpox. There is usually no need to see a physician.

However, if the lesions become infected or prolonged fever, cough, lethargy, or confusion occurs, the child should be seen by a doctor immediately. Immunocompromised children with chickenpox should also be evaluated.

All adults who develop chickenpox should see a doctor right away for treatment with an antiviral medication. Immunocompromised patients and those with complications will usually need hospitalization for treatment.

Chickenpox is a viral disease usually occurring in childhood. Although the disease is rarely seen in the United States due to wide vaccination protocols, there can still be breakout cases. Unvaccinated people should be medically evaluated immediately if they are exposed to chickenpox to receive prophylactic treatment.

It is very important for adults and immunocompromised persons to see a doctor if they develop symptoms of chickenpox. Vaccination is still the best way to prevent chickenpox and its complications.