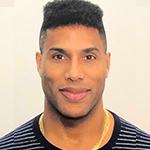 Dr. Brad is a clinical psychologist who enjoys working with people who want to improve their mental performance. He has been trained in dynamic, cognitive-behavioral, and group therapies. Dr. Brad’s approach is integrative with a particular emphasis on the therapeutic relationship experienced through a strengths-based and cultural humility lens. He has conducted research in the areas of implicit racial bias, stereotype threat, and internalized racism in African-Americans.

Dr. Brad has been a predoctoral intern at Woodhull Hospital in Brooklyn, NY where he provided weekly outpatient psychotherapy to children, adolescents, adults, and families from mostly minority backgrounds and underserved communities. Dr. Brad also led a cognitive behavioral therapy group for adolescent boys of color who sought therapeutic relief from the sometimes racial and psychological assaults of everyday life.

As a result of Dr. Brad’s record of academic excellence, he received two prestigious full scholarship (i.e. Merit and University Scholar) awards from City College to pursue his Ph.D. in clinical psychology. As a doctoral student, he was a highly-regarded teacher who taught undergraduate courses in Research Methods, Cognitive, Social, and Personality psychology. He also served as a peer supervisor to two second-year Ph.D. students in clinical psychology who were in adult and child intake classes, respectively.

Before becoming a clinical psychologist, Dr. Brad parlayed his prowess on the football field into a full scholarship to Boston College where he was personally recruited by and played for two-time Super Bowl-winning coach Tom Coughlin of the New York Giants. Dr. Brad also had a successful 15-year career as a model. He has appeared as the face of a New Balance sneaker campaign and walked the runways of New York and Milan Fashion Week. Dr. Brad has also been featured in Italian GQ, Glamour, and Vibe magazines.

Dr. Brad continues to be a highly sought-after fitness coach in NYC with over 15 years of experience. He has shown hundreds of people how easy it is to lose weight and tone up by eating more and exercising less. Dr. Brad believes that most wellness programs today fall short because they don’t include or seriously consider the psychological fitness of their clients.

As someone who has mastered the diet and exercise parts of working out, Dr. Brad felt it was time to take his training in a new and exciting direction. He wanted to do more for his clients by acknowledging the negative thoughts and feelings that were getting in the way of them reaching their full potential. That’s why Dr. Brad created the revolutionary company, Brad Thomas Mind Body.

Depression is generally classified as a psychological disorder, but it has an overarching impact on all aspects of your well-being. It...

Depression is a multifaceted condition that affects different people differently. Thus, there is no one-size-fits-all strategy to overcome this complex problem....

What Factors Put You More at Risk of Depression?

Depression is a complex and wide-ranging problem that manifests in different forms. It is usually impossible to trace depression back to...

What Are the Signs and Symptoms That Suggest Depression?

Depression or melancholia is a complicated condition without a set pattern or clearly defined symptoms. It can have varying manifestations but...

Diagnosis and Tests to Evaluate Depression

Diagnosing depression requires a detailed and long-term assessment as part of evidence-based practice. An initial evaluation of the symptoms helps determine...

Depression is a common medical problem that has a negative impact on your thoughts, feelings, emotions, reactions, physical activities, and daily...

Is CBD Oil Safe and Effective for Managing Autism?

Key Points Cannabis is not for recreational use only, but it is also utilized for its several medicinal virtues. The cannabinoid...