Is CBD Oil Safe and Effective for Managing Autism?

Although the cannabis plant is well known for its use as a recreational drug, there is more to this flowering herb than just its psychoactive properties. The use of various varieties of the cannabis plant for numerous medicinal and industrial purposes has a long history. 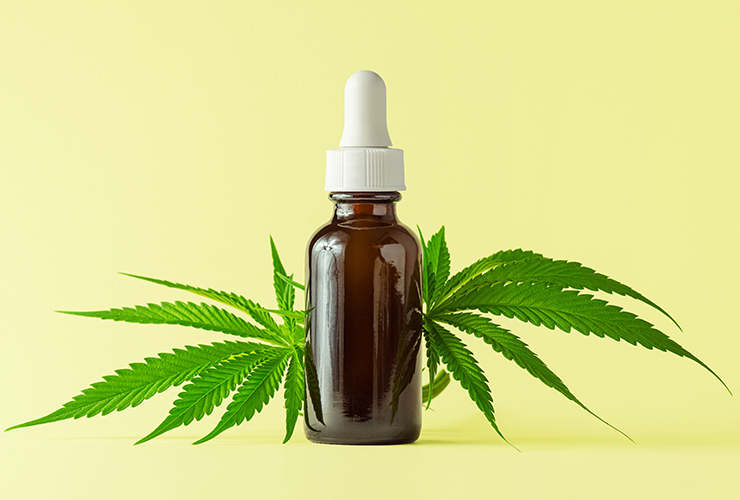 People often assume that cannabis refers to only one plant variety, when in fact it is a genus (a biological classification of structurally related groups of organisms) with multiple different species (organisms with similar features that are grouped together). The most prominent species are Cannabis sativa and Cannabis indica.

The leaves, roots, stems, and flowers of cannabis are each harvested differently to serve a specific purpose, but the plant’s therapeutic potential can be traced back to its inherent composition of nearly 80 different chemicals. These chemicals, called cannabinoids, are found in varying amounts in different strains of cannabis.

Tetrahydrocannabinol (THC) is the most abundant cannabinoid followed by cannabidiol (CBD), both of which create vastly different effects. THC is responsible for creating the mind-altering, intoxicating effects associated with this plant, whereas CBD is purely non-psychoactive. (1)

The psychoactive potential of cannabis directly depends upon the amount of THC it contains, which can alter brain function by influencing one’s perception, consciousness, mood, cognition, and behavior. CBD produces no such recreational effect and is solely reserved for medicinal or industrial purposes.

Marijuana is one variety of cannabis that has much higher concentrations of THC than CBD. The high THC content accounts for its potential mind-bending effects. Marijuana is widely cultivated to be used as a recreational drug.

Hemp is another popular variety of the Cannabis sativa species, which contains high amounts of CBD but minimal amounts of THC (less than 0.3%). Unlike marijuana, hemp does not induce any hallucinogenic or intoxicating effects as it does not contain enough THC.

Instead, hemp is specially grown for fibers and CBD content. The CBD derived from hemp plants is then used to make a medicinal oil that has gained popularity as a prospective treatment aid for multiple conditions.

Products containing CBD oil have been used for the following therapeutic benefits:

Hemp and marijuana have different mechanisms of action and safety profiles and should not be used interchangeably.

For many years, all varieties of cannabis plants were considered equal and were regarded as illegal substances. But in 2018, a Farm Bill was passed to legalize the use of hemp-based CBD oil. For industrial hemp to be legal, its THC content must not exceed 0.3% of the total composition. (1)

How Is CBD Oil Used?

CBD oil is considered safe for both internal and external use. The beneficial properties of this non-intoxicating oil can be utilized in a variety of ways:

You can use liquid oil itself or try other medicinal products that contain it. CBD can be orally administered as a tincture or be taken in the form of a pill. You can even bake brownies infused with CBD oil or smoke it up.

Other CBD products that are commercially available include:

Before the latest publication of the DSM-V (Diagnostic and Statistical Manual of Mental Disorders, Fifth Edition) in 2013, autism was grouped with four other disorders to comprise the diagnostic category of pervasive developmental disorders (PDDs).

PDDs highlight delays in the development of social and communication skills. In 2013, the classification of PDD was removed and is now referred to as autism spectrum disorders.

ASD can manifest differently in different people. The criteria for the disorder can include deficits in non-verbal communication, social-emotional reciprocity, restricted and repetitive behaviors and interests, and hypersensitivity to sensory input (such as light, sounds, and touch).

The severity of the condition can also vary, from minor impairment to a more serious disability. Some people experience minor difficulties in their development of social and organizational skills while exhibiting a remarkable aptitude for communication and academics.

In severe cases, the condition can be quite debilitating and can seriously impair one’s ability to perform even the most mundane tasks (such as eating, sleeping, and drinking water).

Nearly 1 in 59 children are diagnosed with this complicated condition, according to the Centers for Disease Control and Prevention. (3)

Truth: There are many people with autism that have very high IQs and excel in math, science, and other academic or non-academic pursuits. First and foremost, children with autism need their parents or primary caregiver to provide them with safety and structure. This starts with parents becoming experts on their children and learning as much as possible about the neurodevelopmental disorder.

Is CBD Oil Helpful in Autism?

CBD oil has been touted as a potential treatment for stress, anxiety, post-traumatic stress disorder (PTSD), and neurological difficulties such as epilepsy and autism. However, there isn’t enough scientific evidence to establish its efficacy yet.

As mentioned earlier, cannabidiol (CBD) is a chemical substance derived from the cannabis plant that can significantly affect brain function. CBD is mixed with a carrier oil, like hemp seed oil or coconut oil, to dilute its potency, and the resultant mix is known as CBD oil.

The lack of sound data on the use of CBD oil as an effective treatment for ASD symptoms, has not stopped parents of autistic children from increasingly advocating for its use through social media and other platforms.

Most parents usually turn to CBD oil as a complementary tool for managing their child’s autism symptoms when nothing else seems to work. There is still a need for large-scale research to evaluate CBD’s effectiveness. (4)

However, there have been a few small-scale studies that have highlighted the therapeutic potential of CBD for reducing the frequency of seizures and the intensity of other autism symptoms in children. Most kids with autism tend to be unusually restless, hyperactive, anxious, and aggressive and exhibit a tendency for self-injury as well as sleep disorders. (5)(6)

For instance, a small-scale study conducted on 53 children with a median age of 11 (4-22) years suggested that the administration of cannabidiol for a median duration of 66 days (30-588) may help mitigate ASD comorbidity (conditions that co-occur with ASD) symptoms, such as reducing somnolence (excess sleepiness) and improving appetite. However, the long-term efficacy and safety of this treatment modality need to be further evaluated through large-scale clinical trials. (7)

Another 2013 survey showed that nearly 84% of the parents reported a considerable improvement in their child’s condition post-treatment with CBD-enriched cannabis. Not only did the administration of CBD reduce the frequency of their kids’ seizures, but it also improved their alertness, mood, and sleep quality. (8)

Results of a 2019 review study showed that cannabidiol might be a potential candidate for treating ASD, but there is no convincing preclinical or clinical research to verify its efficacy and safety in this regard. (9)

If parents suspect their child may have autism, it is very important that they discuss their concerns with the child’s primary healthcare provider, who may refer the child for a comprehensive evaluation of autism.

Many of the therapies employed are behavioral and require no medication. As an example, applied behavioral analysis has shown to be effective in improving social and communication skills and IQ scores in children with autism. (10) However, if the target behaviors are severe and do not respond to behavioral therapies alone, medication is sometimes required as a way to improve effectiveness.

Typically, behavioral therapy alone or in combination with medication can curb the most problematic behaviors seen in autism. It is highly recommended that parents consider these well-established and traditional treatments before trying an unproven approach, such as CBD, that has shown some promise but has not undergone rigorous, large-scale, empirical research to validate its effectiveness.

The Link Between Epilepsy and Autism

Epilepsy is one of the most common neurological disorders characterized by recurrent seizures brought on by abnormal nerve cell activity.

The exact reason for this co-occurrence is yet to be established, but it is generally attributed to certain underlying genetic and environmental factors that can predispose one to both of these conditions. (11)

Given that both these neurological disorders seem to be interconnected based on certain common contributing factors, the treatment for one may also help lessen the symptoms of the other.

Epidiolex is the first and only drug containing CBD that is approved by the Food and Drug Administration (FDA) for the treatment of seizures associated with two uncommon but serious forms of epilepsy in patients 2 years of age and older. (12)

Another 2018 systematic review hinted at the positive impact of cannabis and cannabinoids on the treatment of epileptic seizures that are otherwise resistant to drug therapy. Still, these claims remain unsupported due to a lack of large-scale clinical trials. (13)

Given the correlation between autism and epilepsy, the CBD-containing medications and products that showed positive results for reducing the intensity or frequency of epileptic seizures may be helpful for people with autism as well.

Published studies, as well as anecdotal evidence, attest to the safety of CBD. CBD was well tolerated by most subjects in relevant studies and general users, who did not report experiencing any negative reactions after its use.

There has been a mercurial rise in the unauthorized medical use of CBD, which compelled the World Health Organization to investigate its safety and effectiveness.

As per the WHO report, CBD was found to be generally well tolerated by its users with little to no side effects. Furthermore, the report concluded that the negative effects, if any, were usually the result of the interactions between CBD and other medications that the patient was taking. (14)

The following side effects were observed in children with autism after CBD administration:

Other reported side effects of CBD treatment for epilepsy and other psychiatric disorders include:

CBD can interfere with certain kinds of prescription medications and cause adverse reactions. For instance, CBD can increase the blood-thinning effect of anticoagulants, such as warfarin (Coumadin) and can lead to bleeding.

What makes these drug interactions a legitimate safety concern is a fact that CBD is marketed and sold as a supplement, which implies that anyone can start using it without a prescription or checking with their doctor first. This kind of self-treatment can lead to potentially dangerous consequences for one’s general health.

Thus, it is really important to consult with a healthcare provider before using CBD oil or any of its related products to treat a medical condition, so that patient safety is prioritized.

The following considerations should be kept in mind before using CBD:

The dearth of empirical evidence testifying to the benefits of CBD oil for patients with autism leads to a need for larger studies before it can be established as an acceptable alternative to the standard treatment.

There is still uncertainty regarding the appropriate dosages and the form in which CBD should be used. This paucity of information is only made worse by the lack of quality control in CBD products.

Nonetheless, one cannot disregard the significant media advocacy and parental reports that highlight the effectiveness of CBD oil in the symptomatic treatment of ASD. This degree of interest has only increased awareness of alternative treatments for ASD and highlighted the need for more rigorous research studies that could potentially show the benefits of CBD for patients with autism.