Gout is a type of crystal-related inflammatory arthritis that mostly manifests as an acute attack but can also cause chronic arthritis. 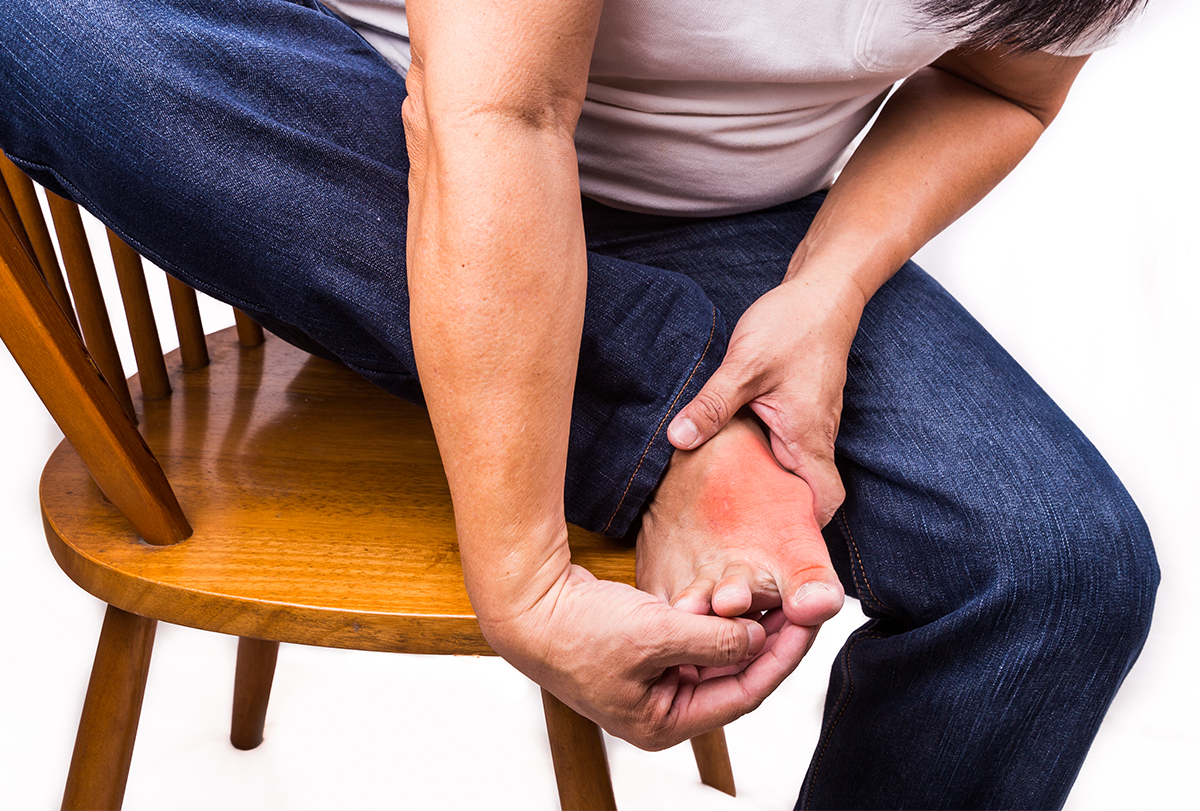 This condition is characterized by increased pain and swelling in the joints of the feet, particularly the big toe, or the fingers, wrists, knees, ankles, and elbows.

Gout affects people of both sexes but it is more prevalent in men than in women. It is only after menopause that women have an increased tendency to develop gout. (1)

Tissues That Are Affected by Gout

There is no joint in the body that is safe from gout symptoms, but the condition targets the joint at the base of the big toe more than any other. This is largely due to the location of the toe, which lies farthest from the heart. This specific form of gout is known as podagra.

Bursae are thin fluid-filled sacs that lie at the juncture between the bones and the surrounding soft tissue. By minimizing the friction between the skeletal tissue and the opposing soft tissue, bursae help facilitate the easy movement of the joint.

Although bursae are present all over the body, gout primarily targets the areas that cover the tip of the elbow and the front of the kneecap.

Uric acid is formed as a by-product when the body metabolizes certain chemical compounds known as purines, which are present in a variety of foods.

Gout occurs when there is a buildup of uric acid in the body, which can happen due to an overproduction of the substance or the inability of the kidneys to get rid of it fast enough.

Over time, the excess uric acid becomes very saturated and forms sharp monosodium urate crystals, which are then deposited in the tissues of the joints. The following factors can contribute to high uric acid levels in the body and can increase your chances of having a gout attack:

Signs and Symptoms of Gout

A gout attack usually manifests in the following pattern:

People with gout are usually prescribed a two-pronged treatment plan.

Part of the treatment is geared toward providing symptomatic relief during an active gout attack, while the other is concerned with preventing future attacks by lowering uric acid levels in the body.

Gout flare-ups are typically managed and prevented through the following medications:

NSAIDs such as colchicine refer to a class of anti-inflammatory medications that can help reduce the joint pain and inflammation associated with gout, especially when taken in the initial phase of the flare-up.

Certain NSAIDs can easily be purchased over the counter, such as ibuprofen and naproxen. However, you will most likely need a doctor’s prescription to get the stronger ones.

Note: Prolonged or excessive use of NSAIDs can cause nausea, vomiting, diarrhea, kidney disease, and other adverse side effects. NSAIDs are not recommended for people with renal disease, as they can amplify the toxic load on your kidneys. Aspirin is strictly ill-advised for gout patients as it can raise your uric acid levels and make your condition worse. (3)

Corticosteroids are only prescribed when NSAIDs fail to provide the desired relief, when NSAIDs are considered unsafe for the patient, or in case of a severe attack. They aim to provide quick relief from an active gout attack but can be extremely damaging if used in the long term.

In severe cases of gout, the doctor may prescribe oral corticosteroids or administer them through an intramuscular (IM) or intravenous (IV) injection.

Your doctor will delineate a treatment plan to reduce the buildup of excess uric acid in the bloodstream, which can lead to the formation of tophi or kidney stones if left unchecked. This kind of preventative therapy includes prescription drugs such as allopurinol, febuxostat, and pegloticase, probenecid, and lesinurad.

Gout is diagnosed based on medical history, a physical examination of the affected joint, and test results. The following diagnostic tests help diagnose gout.

The doctor will conduct a blood test or a urine test to evaluate your uric acid levels. The results of these tests alone cannot specify whether you have gout or not but they can determine an elevated uric acid level, which is a necessary precondition for the onset of gout.

Fluid from the joint is extracted through a needle which is then examined under a microscope for traces of uric acid-based crystals. If gout is left untreated for a long time the crystallized uric acid may accumulate to form a mass under the skin.

Such condensed deposits of urate crystals are referred to as tophi and usually appear in the late stages of gout. In such a case, the doctor will use a special procedure called arthrocentesis, which involves drawing fluid from the swollen joint.

The need for an X-ray may arise in advanced cases of gout to determine the extent of the damage.

In the initial stages of gout, the urate deposition is too minimal to be captured by these imaging techniques. Thus, an X-ray of the joint will rarely be useful in catching the condition early.

Musculoskeletal ultrasound may reveal a double contour sign on the involved cartilage and a snowstorm appearance suggesting the presence of floating or accumulated monosodium urate crystals within the joint or along the tendons. Both these markers can indicate tophi formation in the X-rayed site. (4)

MRI and CT scans are rarely used but are useful in long-standing but rare cases of gout involving the spine.

The following factors can increase the likelihood of developing gout:

Gout, when not managed properly, can lead to the following complications.

If gout is left untreated for a long time, the urate crystal may clump together to form a hardened mass under your skin known as tophi. The development of tophi is largely painless, but the damage it causes is significant enough to permanently deform the affected joint.

Chronic gout can lead to sustained inflammation in the joints, which can render them increasingly stiff and immobile. This is made worse by tophi formation, and you may even need surgery to repair or replace the severely damaged joints.

Elevated levels of uric acid, particularly in chronic gout, can lead to the formation of kidney stones. The urate crystals can get deposited in your urinary tract over time, which can scar or damage the kidneys and gradually can lead to the onset of kidney disease.

People with chronic gout struggle with constant or long-term pain and inflammation in their joints, which can take a serious toll on their mental and emotional health. They may find it difficult to walk or perform the most basic everyday tasks, which can lead to frustration and emotional distress.

Your doctor may refer you to a rheumatologist to avoid tophi formation and the subsequent permanent joint damage and deformity.

Early treatment and monitoring of uric acid levels to see how well you are responding to the current treatment are important for optimal control of the disease.

What food items should be avoided when suffering from gout? Are tomatoes bad for gout?

The food items to avoid in gout or to be consumed in strict moderation are alcohol, especially beer and hard liquor, red meat/organ meat such as liver and kidneys, seafood, sugary drinks/foods high in fructose, processed foods, and refined carbohydrates.

It has been recently shown that tomatoes are bad for gout, and a recent study linked tomato consumption to high urate crystals. (5)

Is it possible to cure gout permanently?

It is always possible, but it requires more of a lifestyle change. Sometimes, the body can’t clear or make too much uric acid. So, you need to help yourself out by having the right diet and taking the appropriate medication to keep the levels at bay and reduce the frequency of the attacks.

Does gout worsen during nighttime?

A gout attack can happen at any time, but yes, if the uric acid levels are too high, then you wake up the next morning with an acute gouty attack. It all depends on how our body uses sleep and rest to heal itself, which in turn affects the uric acid levels.

Not so much as bone cancer itself, but patients with gout have been shown to have an increased risk of certain cancers.

How can the pain associated with gout be managed?

Gout is all about diet modification and moderation. As long as you follow the proper diet strictly, you can help eliminate a lot of frequent attacks and the associated pain.

If the diet is not enough, please see your nearest rheumatologist to get the proper medication to help keep the uric acid levels down.

About Dr. Hai-En Peng, Podiatrist: Dr. Peng was born in Nyack, NY, and went to California College of Podiatric Medicine in San Francisco, CA, where he graduated in the top 15% of his class.

Living with gout can be hard, and you need professional guidance from your doctor or a mental health expert to come up with healthy coping mechanisms.

You have to grapple with constant pain and inflammation in your joints that progressively worsen in the absence of proper care and treatment. You may find it difficult to move about, perform the most basic tasks, or even get a good night’s sleep. Thus, this condition can hamper your overall quality of life.

The joint can become so badly damaged that you may have to undergo replacement surgery to retain any mobility in the affected area. The only way to avoid such serious complications is to seek early treatment for your condition before it gets any worse.