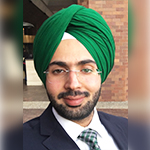 Dr. Tejbir Pannu is an orthopedic surgery research fellow at the Cleveland Clinic. He has always been interested in orthopedics due to the significant change brought by surgery in the quality of life of patients with musculoskeletal disorders.

Before this role, Dr. Pannu worked at the Hospital for Special Surgery, New York (Cornell University), one of the best orthopedic hospitals in the world, for 3 years. Working at the Cleveland Clinic gives him resources, and opportunities to conduct state-of-the-art research helping the scientific community investigate and understand the unknown and apply directly into the patient care to improve the clinical patient-reported outcomes.

Looking back, comprehensive clinical research training from Harvard after completing his MD from BFUHS has played a major role in the development of the research acumen of Dr. Pannu.

In addition, Dr. Pannu studied Orthopedic Biomechanics (MS) at the prestigious New York University (NYU). These training years have honed his clinical research skills placing him in the top young scientists of the country.

What Causes Leg Weakness and Ways to Recover, Explained by an Orthopedic Doctor

Leg weakness is usually a symptom of an underlying condition rather than a medical condition itself. It refers to a feeling...