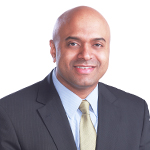 Dr. Thott completed his OB/GYN training at Reading Hospital and Medical Center and took the position as CEO and Physician at Women’s Health and Surgery Center in Stafford, VA.

In 2009 he assumed the role of Chief of Department of Obstetrics and Gynecology at Stafford Hospital in Stafford, VA. He was named to Northern Virginia Magazine Top Doctors list for several years in a row and has been listed by Castle and Connelly top doctors in the US.

His areas of expertise are minimally invasive laparoscopic surgery, Urogynecology, Endometriosis excisional surgery, and fibroid surgery. He is also one of the handful surgeons in the US to perform non-robotic Laparoscopic tubal reversal.

What Causes a Prolapsed Uterus and the Best Ways to Treat It, According to an OBGYN

Uterine prolapse (1) is generally defined as the descent of the uterus into the vagina. The uterus is located within the...