Benefits of Surya Namaskar (Sun Salutation) and How to Do It

Yoga is a wonderful ancient practice that combines breathwork, movement, and meditation. One of the first practices that many yoga instructors learn to teach is a series of movements called Surya Namaskar. 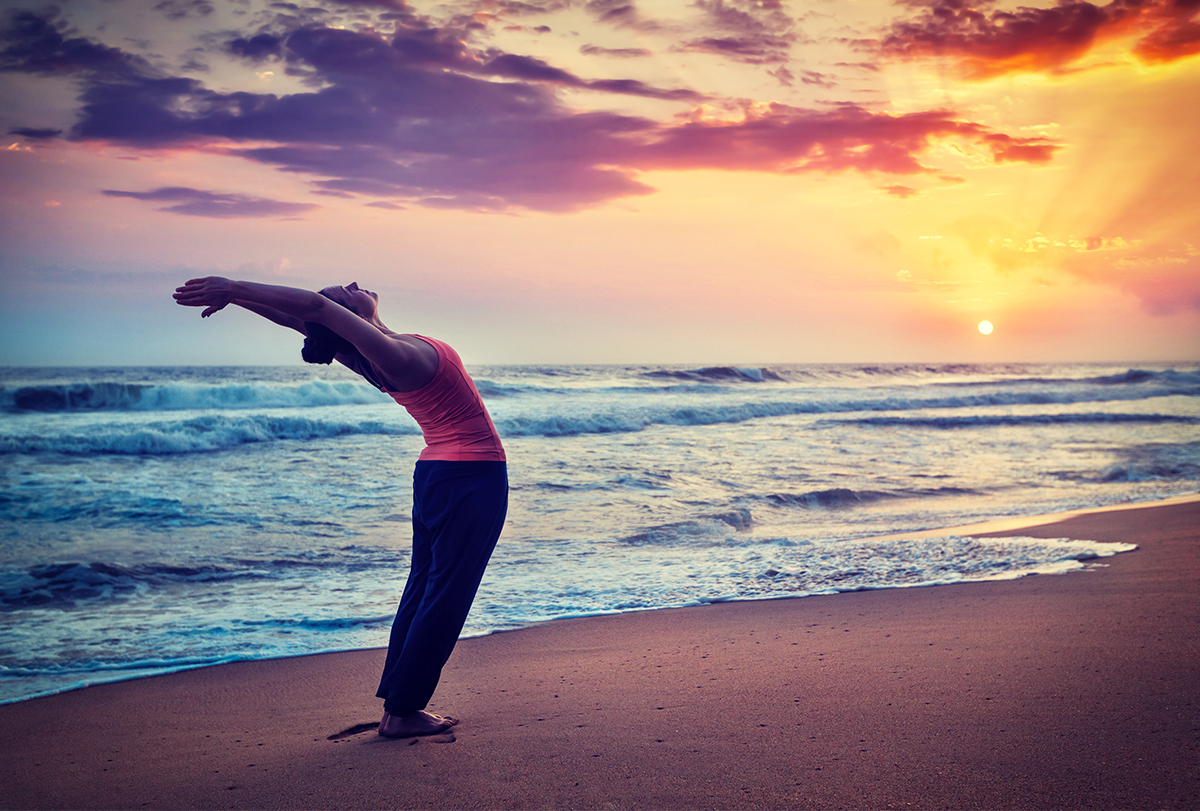 Surya Namaskar translates to sun salutations. It is literally a practice that is meant to salute the sun and wake up the body. This practice is very beneficial to do, and when practiced first thing in the morning, it gives the system a great boost for the rest of the day. (1)

Surya Namaskar A is made up of the following poses:

There are many Surya Namaskar variations. Most poses can be added to a sun salutation to create a new fun variation.

Some common poses that are used in Surya Namaskar include but are not limited to:

Surya Namaskar has many advantages for the mind and body. Benefits of sun salutations include but are not limited to:

How to Do Surya Namaskar

Sun salutations have many variations, but Surya Namaskar A is the most common. Here’s how you can do a sun salutation:

1. Begin in the mountain pose (Tadasana) with feet hip-width apart and hands at heart center.

2. On the inhale, lift the arms up to the sky, opening the heart and taking a slight backbend in an upward hand pose (Urdhva Hastasana).

3. On the exhale, bend at the waist into a forward fold (Uttanasana).

4. Inhaling, lift up halfway into a half-forward fold (Ardha Uttanasana).

5. Drop the hands to the ground, and jump or float the feet back into a plank pose (Phalakasana).

6. Exhaling, bring the hands, chest, and chin to the ground in a four-limbed staff pose (Chaturanga Dandasana), and then straighten out the body.

7. Inhaling, come up into a cobra pose (Bhujangasana), being mindful not to overextend and to lift with the muscles of the back.

8. Exhaling, tuck the toes, and press back into a downward-facing dog (Adho Mukha Savasana), keeping a flat back. The knees can have a slight bend if need be. If desired, five breaths can be taken while holding this pose.

9. On the next inhale, jump or float the feet forward to the hands.

10. Exhale into a forward fold (Uttanasana).

11. Inhaling, bring the arms out and up, leading back up to an upward hand pose (Urdhva Hastasana).

12. Exhaling, bring the hands together at heart center, standing in a mountain pose (Tadasana).

Surya Namaskar can be done as many times as is comfortable. Some people will do about five to ten at once. The number of times this practice should be done really depends on you, your experience level, and your stamina.

A Great Way to Start the Day

By flowing through the poses of Surya Namaskar in the morning and linking the movement with the breath, the blood starts pumping and the body can wake up faster.

The poses mimic the sunrise and sunset and are meant as a salute to the sun. Thus, it is best to perform Surya Namaskar early in the morning on an empty stomach, 5–10 times in the beginning.

When practicing in the sunlight, the mind is naturally more relaxed and serotonin is released, leading to a happier experience of the oncoming day.

By starting the morning with deep breathing and movement, the muscles become more open, the fascias are stretched (giving it more flexibility), and the organs are stimulated, making you ready for the day. It is also a great workout!

Some people prefer to do a more intense practice, doing 108 Surya Namaskars at a time. The sacred number 108 is often used in spirituality and yoga for many reasons.

One reason is there are 108 Upanishads (spiritual teachings). Another reason is 108 represents the distance of the earth, sun, and moon, multiplied by their diameters. In addition, Vedic tradition says that 108 is the number of existence.

Often in yoga, breathwork and mantras are repeated 108 times, and mala beads are used to help keep track of these.

Surya Namaskar is practiced 108 times, usually when the seasons change to represent a new start and being reborn. This can be very intense on the body with many benefits, but it is meant to be done by those who have a lot of experience with yoga and Surya Namaskar.

Any yoga practice is great for the body, including the benefit of weight loss. Surya Namaskar, in particular, is very helpful for weight loss and toning the body.

Many exercise-focused yoga classes use Surya Namaskar as a basis for the class. By continuing to flow through the movements, you can receive a great workout that definitely breaks a sweat.

What Does Science Say About Surya Namaskar?

There is a reason this practice has been used for so many centuries. It is great for the body, and it has many benefits that are actually scientifically proven! (1)

Studies have been conducted to see how sun salutations affect the body, and results revealed that the practice improves focus, strengthens and tones the body, (2) regulates stress, (4) increases blood flow, and benefits the respiratory system. (5)

Surya Namaskar is a highly beneficial yogic routine that helps boost your health. It not only aids weight loss, but it also helps improve immunity, mental health, metabolism, and cardiovascular health.