Home > Skin & Beauty > What Your Nails Say About Your Health

What Your Nails Say About Your Health

People usually don’t pay much attention to their nails, not realizing that the condition of their nails can give insights about the inner workings of their body. 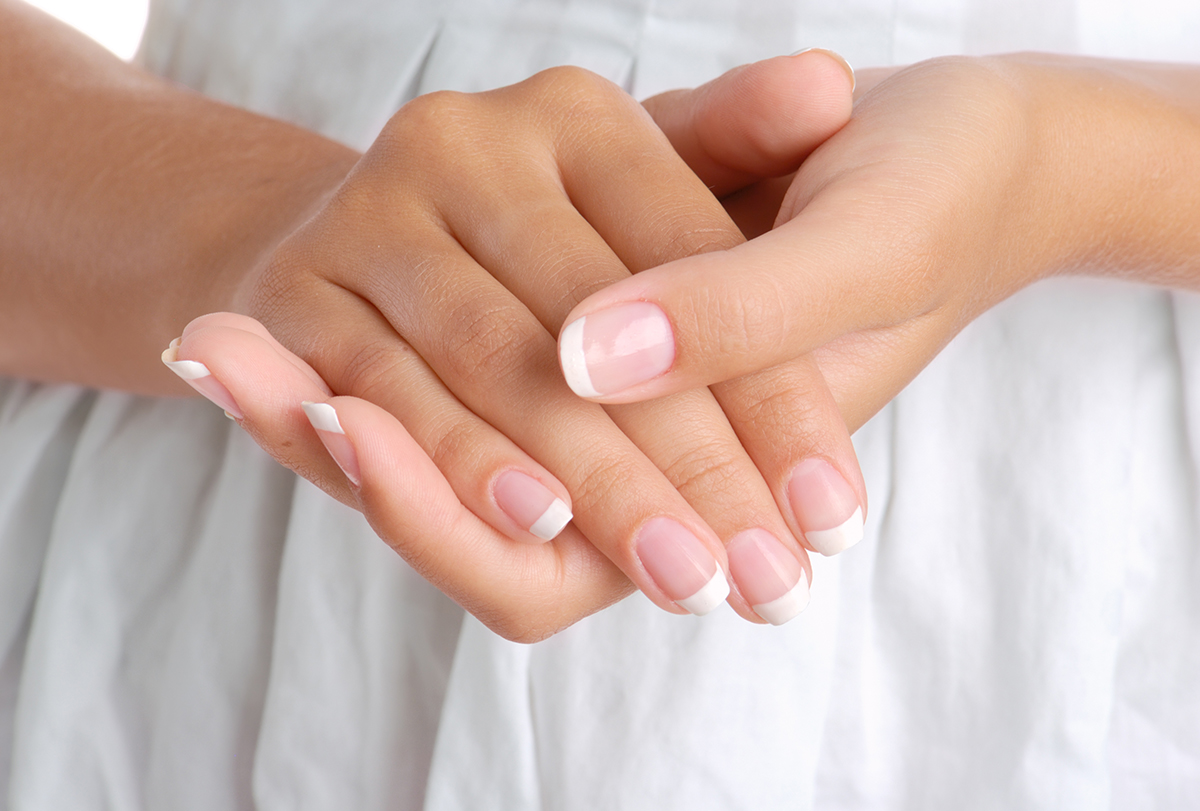 Having strong, smooth, spotless nails with a pink nail bed is considered a sign of good health, whereas any untoward changes in nail growth, color, consistency, and appearance can be a result of localized or deeper systemic conditions.

Thus, your nail health reflects your inner health and can alert you to the onset of various diseases that may occur silently without any other symptoms. It is important that you visit a dermatologist or physician if you notice anything odd about your nails to rule out any underlying health concerns.

The embryonic origin of nails starts developing at the 7th–8th weeks of fetal development and the nails are completely constructed at childbirth. (1)

The average nail lengthens two-three millimeters every 4 weeks, replacing itself entirely once every 6–9 months, depending on the individual. (3)

The primary purpose of nails is to provide sensory, thermoregulatory, and protective features to the distal fingers and toes. (4)

Here are common nail-related symptoms and their probable root cause.

One of the leading explanations of yellow discoloration of the nails can be a fungal infection of the nail folds and subungual tissue, also known as “onychomycosis.” It can oftentimes be characterized by flaking of the nails leading to nail thickening and crumbling, accompanied by an unpleasant odor. (2)

Depending on the severity of the infection, it can be localized to one digit or can involve all five nails bilaterally. Although more commonly affecting the toes, it may also affect the fingers.

An infrequent and rare cause of yellowing of the nails is “yellow nail syndrome.” This condition’s etiology is still unclear but is said to be associated with a dysfunction of the lymphatic drainage. (5) This is often confused with onychomycosis as the nails may become thick and hard, presenting very similarly. (5)

Nail discoloration is one of the signs of advances in aging. As humans age, the nail morphology can tend to take a duller, more pale, and whitish appearance. (6) Although physiologic in the senile age, its presence in early age may be idiopathic (unknown cause) or indicate an underlying disease.

A whitish discoloration of the nails, also known as “leukonychia,” can appear similar to pale nails. Muehrcke’s nail or Muehrcke’s lines are a form of leukonychia and may indicate an underlying systemic disease.

These nails present a whitish discoloration that can fade when applying pressure to the surface of the nail plate. This is predominantly a manifestation of “hypoalbuminemia,” which refers to decreased blood albumin levels.

Albumin levels can be low from reduced production due to liver disease or increased excretion from the kidneys due to renal disease, mainly nephrotic syndrome.

Other conditions that may cause hypoalbuminemia are systemic inflammatory disease and individuals receiving chemotherapy. (7) Thus, pale nails can signify aging, anemia, or more serious illness like liver disease.

Nail brittleness can result in cracked and split nails. The two common types of presentation for ilils are “onychoschizia” and “onychorrhexis.”

Onychoschizia is a term for the horizontal distal splitting of the nail’s free end and can also be referred to as lamellar splitting. This occurs most commonly from trauma, causing separation to the adhesions of the nail plate intracellularly. It can also occur from frequent washing of the hands.

Onychorrhexis presents as longitudinal splitting rather than horizontal splitting. This can occur either as a single split or several longitudinal splits of the superficial nail plate, which may be an idiopathic occurrence with no underlying identifiable cause or can be due to various conditions such as trauma, nail-biting, alopecia areata, nutritional deficiencies, nail fungus, eczema, psoriasis, anemia, or bulimia nervosa. (8)(9)

Two of the top causes of nail thickening are fungal infection (onychomycosis) and psoriasis of the nail. These conditions cause excessive proliferation of keratinocytes at the nail bed’s distal end and buildup of debris toward the proximal end of the nail, also known as “subungual hyperkeratosis.” (10)

Psoriasis of the nail is known to occur as a dysregulated immunological response of the innate immunity. A genetic component has been associated but not confirmed. (11)

The presentations can be similar between both onychomycosis and psoriasis of the nail and should be investigated thoroughly, as misdiagnosis may lead to delays in management and outcome.

5. Clubbing of the nails

Clubbing of the nails refers to the convex appearance of the nail. The standard anatomical angle of a healthy nail is 160 degrees and is considered “clubbing” when the angle between the proximal nail fold and the nail plate exceeds 180 degrees.

This type of nail disorder can be secondary to acquired etiologies, such as vascular disorders, cancer, inflammatory conditions, and infection. (12) It may also occur solely without underlying pathologies as a benign inheritance.

Spoon nails, also known as “koilonychia,” refer to nails with a concave appearance that can be either horizontal or vertical. These nails are brittle and thin in either the fingernails or toenails and can be seen in all age groups.

This condition can be hereditary, congenital, acquired, or idiopathic. (14) When spoons nails are present, it is vital to rule out an underlying systemic cause.

Spoon nails most frequently develop as a manifestation of severe chronic iron deficiency anemia. The origins of iron deficiency are aplenty and should be investigated thoroughly for systemic or chronic diseases that may be present.

Nail pitting, also termed “trachyonychia,” presents as studding or denoting dots or depressions on the nail plate’s surface. This occurs due to defective keratinization of the proximal nail matrix and surface.

Nail pitting may be idiopathic or can be a manifestation of conditions such as psoriasis, alopecia areata, eczema, and chronic renal failure. Other uncommon causes include systemic lupus erythematosus (SLE), sarcoidosis, dermatomyositis, and syphilis. (15)

Terry’s nails may present as a whitish discoloration, also known as “leukonychia,” with a pinkish brown stripe at the tip. It is also characterized by a 0.5–3.0 mm wide, brown to pink nail bed bands. (3)

Terry’s nails are predominantly seen in the fingernails, but their presence in toenails is not uncommon. All fingernails are commonly affected equally, but it may also present solely on one digit.

Terry’s nails are not to be confused with Muehrcke’s nails as both may manifest as a whitish discoloration but should be differentiated as both stem from different underlying systemic disorders.

9. Dark lines on the fingernails

Endocarditis may cause splinter hemorrhages in the nail, which can manifest as linear reddish-brown streaks in the nail. It can also be the beginning stages of a fungal infection or may signify a more serious condition such as melanoma. (17)

Horizontal or transverse depressions in the nail are referred to as “Beau’s lines,” which are not very common in healthy individuals and may signify an underlying health condition. (15) These lines extend across the whole width of the nail with a band-like depression.

It is due to a growth cessation of the nail matrix, which is thought to be temporary and may be precipitated by inadequate nutritional health, acute events such as a heart attack, trauma, infection, and stress.

A full termination in growth will result in “onychomadesis,” which is a group of band-like depressions. (15) Its presence in all digits of hands and feet is indicative of an underlying systemic disease such as Kawasaki disease, mumps, pulmonary, and cardiovascular pathology. (2)

Signs of cardiovascular disease can appear in nails in the form of nail clubbing or a bluish tint in nails, which can be from decreased oxygen levels in the blood.

Endocarditis, a bacterial infection that affects the heart valve, can cause splinter hemorrhages in the nail, which can manifest as linear reddish-brown streaks in the nail. (15)

Deficiencies in iron, zinc, biotin (B7), folate (B9), and cobalamin (B12) can all cause specific nail symptoms.

Healthy nails are smooth, durable, and even in texture; the nail bed is pink, and the nail margin is white without ridges. Healthy nails should not be brittle or excessively thick nor have depressions, splits, streaks, or discoloration.

To maintain the appearance of healthy nails, it is beneficial to practice grooming methods such as nail cutting and the use of aesthetic products to strengthen the nails.

Along with sensory and protective functions, the cosmetic feature of nails is equally significant.

A nutrient-dense diet that is low in sugar, sodium, and saturated fats can strengthen the nails alongside the hair and skin. Nutritional dietary supplements such as B vitamins (biotin (B7), folate (B9), cobalamin (B12)), and minerals (iron and zinc) can also be incorporated.

Is It Normal for the Fingernails to Become Yellow as One Grows Old?

While it is normal for nails to turn dull or pale as a person ages, it is still uncommon for elderly people to have yellow fingernails. Chronic smokers, on the other hand, may display yellowing of the fingernails caused by staining from nicotine. (19)

The nails can provide great insight into the overall health of an individual. The various nail morphologies can be idiopathic, acquired, hereditary, or a manifestation of underlying health concerns.