Lyme disease refers to a bacterial infection with Borrelia burgdorferi. These bacteria are commonly carried by deer ticks, or blacklegged ticks, which are approximately the size of sesame seeds, making them difficult to locate. 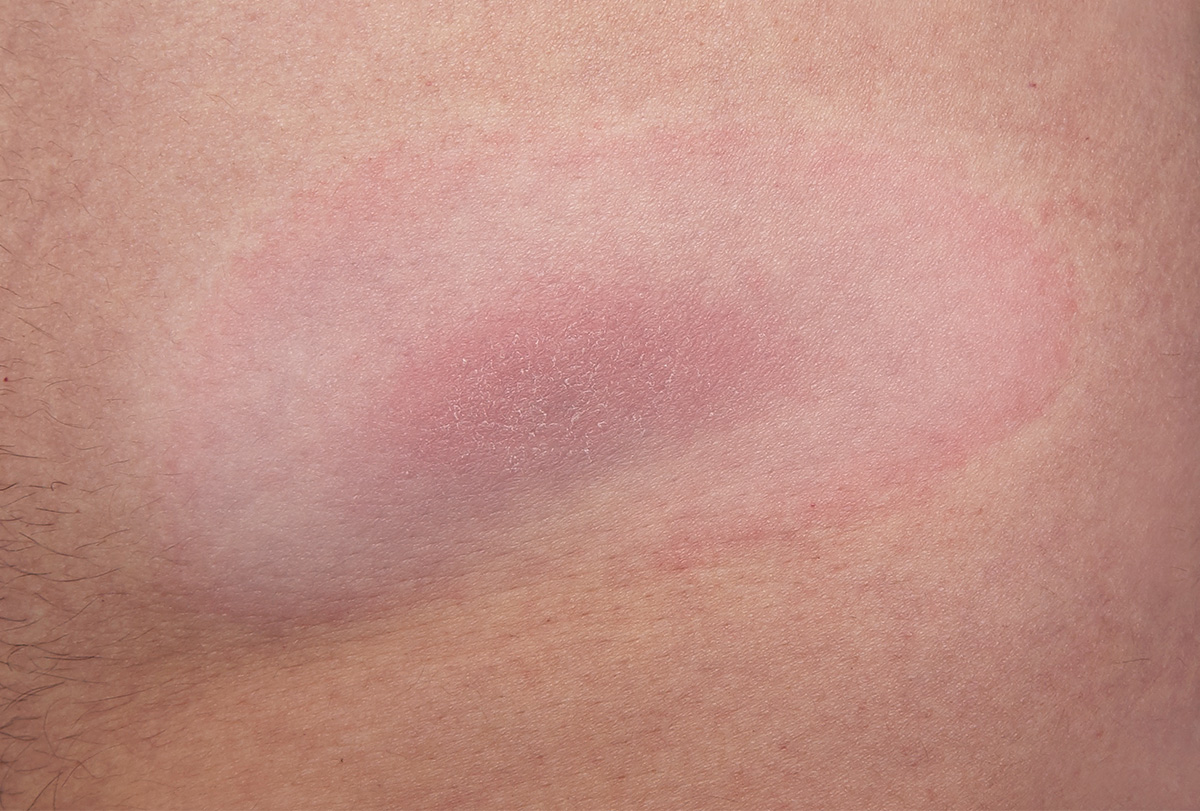 Deer ticks feed on deer and human blood to complete their life cycle. Thus, deer ticks are often observed to bite humans. The ticks may be found attached to any part of the body, generally in hidden areas such as the armpits, scalp, and groin, making it more difficult to see them.

However, the ticks may sometimes crawl on the body or clothes for hours. (1) It is only while biting that the ticks transfer the Lyme disease bacteria to your blood and cause infection. Deer ticks can also transmit other microbes such as babesia, anaplasma, and borrelia, so Lyme disease often may be accompanied by these infections.

States such as Maryland, Connecticut, Minnesota, and Massachusetts are largely affected by Lyme disease. Even within such states, there are areas of low and high risk, depending on the tick breed, human contact, and temperatures.

Lyme disease is also reported in other parts of the United States, Asia, Europe, and Australia. It is the most prevalent in early summer and late spring.

Stages and Symptoms of Lyme Disease

Lyme disease can be categorized into three stages based upon the progression of the disease. Since not all cases of Lyme disease are diagnosed immediately, the disease may progress into higher stages due to a lack of timely treatment.

The onset of symptoms occurs after 1–2 weeks of the tick bite. The following symptoms are presented at stage 1 of the disease:

Early disseminated Lyme disease is characterized by systemic infection, which means that the infection spreads to other body parts, taking weeks to months after the bite.

The following symptoms may manifest, along with those of the first stage:

A lack of treatment up to years after the tick bite can lead to the late disseminated Lyme disease, which shows the following signs and symptoms:

Note: Even children affected by Lyme disease have similar symptoms. However, the bull’s eye rash may not develop in children. Therefore, it is essential to be cautious and vigilant of tick bites, especially in the peak season.

Lyme disease treatment is carried out according to the clinical manifestations and symptoms an individual has. (3) This may include the following antibiotic treatments:

It can get difficult to identify Lyme disease as not everyone may develop symptoms. Moreover, due to its small size, the tick may go unnoticed. Therefore, it is best to take measures toward preventing yourself from getting a tick bite. (4)(5)

The following tips may be helpful in avoiding Lyme disease:

1. Be cautious in areas that may have ticks

It is vital to know that blacklegged ticks are most common in humid, moist environments, such as around grass or wooded areas. Therefore, it is common to pick up a tick when walking outdoors, especially through leaves and bushes.

It is best to avoid walking through bushes or vegetation, and stick to the center of the trail. Additionally, refrain from sitting directly on the ground or near a wall. (6)

It is recommended to wear clothing that covers your skin when you are traveling in wooded or grassy areas to prevent the ticks from attaching to your skin. For this purpose, you must wear full-sleeve t-shirts that are tight at the wrists and neck and tuck them into your pants. Similarly, wear full-length pants and insert the ends into your socks.

It is also suggested to wear light-colored clothes as they make it easier to notice any ticks that may have attached to your clothing. (6) In addition, tie your hair back, wear a hat, and use gloves.

It is advised to spray insect repellents on yourself and any object that you may use to help keep the ticks at bay. You can use EPA-registered repellents that contain IR3535, DEET (N, N-diethyl-meta-toluamide), picaridin, para-menthane-diol, oil of lemon eucalyptus, or 2-undecanone on your clothes, tents, and other outdoor gears. (7)

You can also buy pretreated clothing or outdoor gears containing 0.5% permethrin. Keep in mind not to use repellents near the eyes, nose, mouth, or open cuts as they can be harmful when ingested.

Note: Avoid using repellents on babies under 2 months old. When using DEET products for children, make sure that they are not more than 30% in concentration. Also, avoid direct skin contact with permethrin.

Make it a habit to shower after a hike or outdoor camping, especially in the summer months. Similarly, tumble dry your hiking clothes on high heat for about an hour to kill ticks that may be hidden in the folds of your clothing.

Check for the presence of ticks on your skin after coming from the outdoors to prevent transfer of bacteria. Use a handheld or a full-length mirror and make sure to check folds such as the underarms, belly button, and around the ears. Inspect your clothes and pets as well.

6. Make use of tick pesticides

Spray tick pesticides or acaricides to control the population of ticks in your yard.

Caution: Do not use a pesticide on yourself in an attempt to remove a tick attached to your body.

Regularly clean your play areas, patio, and playground equipment, and avoid surrounding them with bushes, shrubs, or other vegetation. Also, remove tall grasses and leaves around your home regularly.

In addition, clean bird feeders and use gravel between wooded areas and lawns as a tick barrier.

Since Lyme disease is caused by deer ticks, take steps such as removing deer-attracting plants and constructing barriers to keep deer away from your home.

It is also important to educate people, especially children, about such preventive measures to minimize the spread of Lyme disease.

Note: A vaccine for Lyme disease, known as LYMErix, was approved by the FDA in 1998. However, it was only produced until 2002 and is no longer effective. Another vaccine, known as VLA15, is currently being developed and is suspected to provide protection against different strains of Lyme disease-causing bacteria.

Ticks generally transfer bacteria into your bloodstream after 24 hours of attaching to your skin. Therefore, removing the tick on time helps prevent infections. Moreover, a tick may stay attached to your body for 4–5 days, and immediate removal is necessary.

If a deer tick, specifically, is attached to your skin but there’s no swelling, it probably has not transmitted the infection. Therefore, it is vital for you to remove the tick.

Consult your doctor in case you have been exposed to a tick, especially if you develop a rash or flu symptoms. Similarly, seek consultation if you experience heart palpitations, dizziness, or arthritis.

It is also necessary to comply with the follow-up checkup with your doctor during Lyme disease treatment. If the condition doesn’t improve after 2–3 weeks of oral medications, ask your doctor for further treatment options.

How can Lyme disease be diagnosed?

The diagnosis of Lyme disease involves a physical and neurological examination. If the tick is still attached to your body or you have stored it, the doctor may order tests to see if it carries the infection-causing bacteria.

Lyme disease is not a contagious illness, as there is no evidence of it spreading from one person to another. While the infection-causing bacteria live in body fluids, they are not observed to spread by coughing or sneezing.

How long do the symptoms of Lyme disease last?

The antibiotic treatment for Lyme disease can last for 2–6 weeks. While the symptoms improve, you may experience fatigue for longer. Similarly, Lyme arthritis may improve but can also return in most cases.

What is post-Lyme disease syndrome?

Post-Lyme disease syndrome, or chronic Lyme disease, (9) refers to a condition where the symptoms of Lyme disease persist despite antibiotic treatment. This may occur due to an autoimmune response and may cause sleeping disorders, fatigue, memory issues, joint pain, and nerve pain.

These symptoms often last for more than 6 months and are aggravated with other illnesses or stress.

Lyme disease, caused by blacklegged or deer ticks is a bacterial infection that causes fever, rash, joint pain, and other problems. While the disease can generally be treated with antibiotics, the patient may experience fatigue for a long time.

It is possible to avoid Lyme disease with measures that aid in preventing a tick bite. These include wearing body-covering clothes, checking for ticks, removing ticks immediately, and using tick repellants. Always consult your doctor if you have been bitten by a tick, especially if you live in a Lyme disease-endemic area.