Bruises, known medically as contusions or ecchymosis, are characterized by skin discoloration, pain, and swelling. 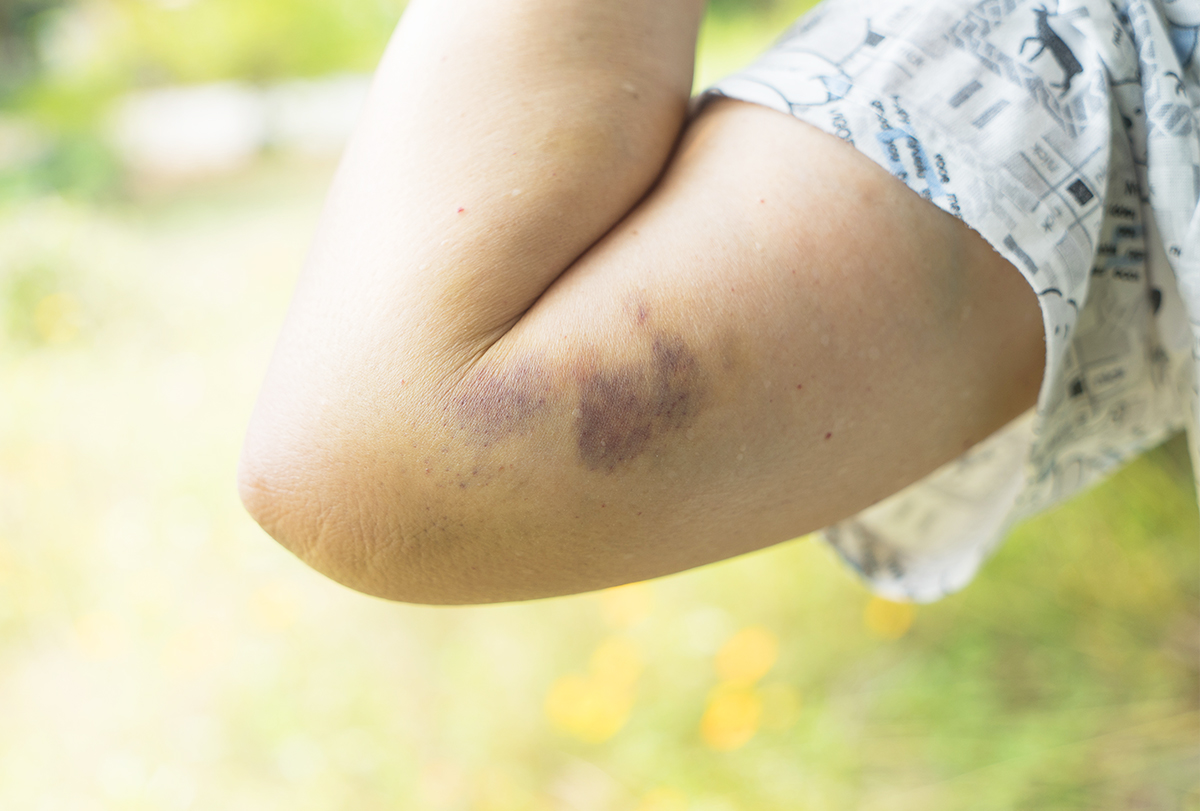 They develop when the blood vessels that lie under your skin or deep in your tissues, organs, and bones become damaged and leak blood in the surrounding tissue.

Bruises can be classified into three different types based on the body parts they occur:

A contusion first appears as a pink or red splotch on the skin, which gradually acquires a bluish-purple hue as the injury matures.

As the bruise heals, it fades to a lighter shade of greenish-yellow before disappearing completely. Most bruises heal within 2 weeks but some can last for months if the injury is severe.

Small contusions that develop once in a while despite any physical trauma are rarely a cause for concern.

What Can Cause a Bruise?

Bruises can be an outcome of a direct injury inflicted on the body either by direct blows or by repeated hitting with a dull object. The jerk may crush the underlying connective tissue and muscle fibers without causing any tear or cuts on the skin surface.

Bruises on the skin are usually incurred from minor trauma or injury which includes:

Bruised splotches on your skin without a definite cause or physical injury or a sudden increase in the frequency of bruising can point toward any of the following health concerns:

A potentially fatal condition that develops when a bacterial infection spills into your bloodstream.

A bleeding disorder where the blood does not clot as properly as it should, leading to excessive bleeding.

A bleeding disorder that can make one prone to easy bruising even from the slightest trauma.

A condition of abnormally low levels of blood platelets, the blood cells that clump together to coagulate the blood.

An inflammation of the blood vessels which occurs due to autoimmune reactions. This reduces the blood flow and can trigger tissue damage, which becomes apparent in the form of skin bruising.

Other diseases can also compromise your blood clotting process and make you prone to bruising. These include:

Symptoms of a Bruise

A bruised skin region may show the following symptoms:

The primary treatment for bruising aims at preventing or stopping bleeding and treating the causative factors. Along with this, you may require:

Note: Avoid taking NSAIDs and blood thinners for contusions as they can interfere with blood clotting. (2)

A timely diagnosis of your bruises can help to determine the underlying reason. This involves:

Certain risk factors can render the capillaries under your skin increasingly fragile and prone to hemorrhaging, while other factors can prevent your blood from clotting fast enough:

At times, the leaked blood may not form a bruise but instead accumulates underneath the skin or inside the surrounding muscle region. This may then get trapped and aggregate into a solid mass known as a hematoma.

The blood residing in the hematoma is in a liquid state and must be aspirated and drained before it completely solidifies. A contusion that is not cared for properly may give rise to compartment syndrome or myositis ossificans.

Advertisements
What are the telltale signs of an infected bruise?

The signs of an infected bruise include ongoing pain, warmth, and tenderness around the area. A fluctuating abscess is also a sign of an infection.

Can anemia cause a person to bruise easily?

Certain types of anemia characterized by a low platelet count can lead to bruising.

Can high levels of stress lead to easy bruising?

This does not happen usually. But again, if the high stress level influences platelet function, then it can cause bruising.

Why does leukemia cause excessive bruising?

In leukemia, the platelet action and clot formation are abnormal and dysfunctional, making the affected individual prone to bruising.

How to get relief from a bruise?

Try to contain the bruise with ice packs and look for a cause. Avoid blood-thinning medications.

About Dr. Firas Al-Niaimi, MRCP: Dr. Al-Niaimi is a consultant dermatologist in the United Kingdom and has over 160 scientific publications.

Even the slightest trauma to the skin can, at times, rupture the blood vessels that lie beneath it and cause pooling of blood at the site, which appears on the surface as a black-and-blue discoloration known as a bruise.

People often incur accidental injuries while performing their daily chores, which results in painful bruising that can easily be relieved through O-T-C analgesics, ice therapy and raising the affected part above heart level.

However, you may require a proper medical checkup and treatment if you get bruised frequently for no apparent reason, if your bruise becomes severely discomforting and long-lasting, or if you notice any signs of infection at the bruised site.