Smoking is one of the top causes of various diseases, such as lung cancer, chronic obstructive pulmonary disease (COPD), heart disease, and stroke, which can eventually lead to death. 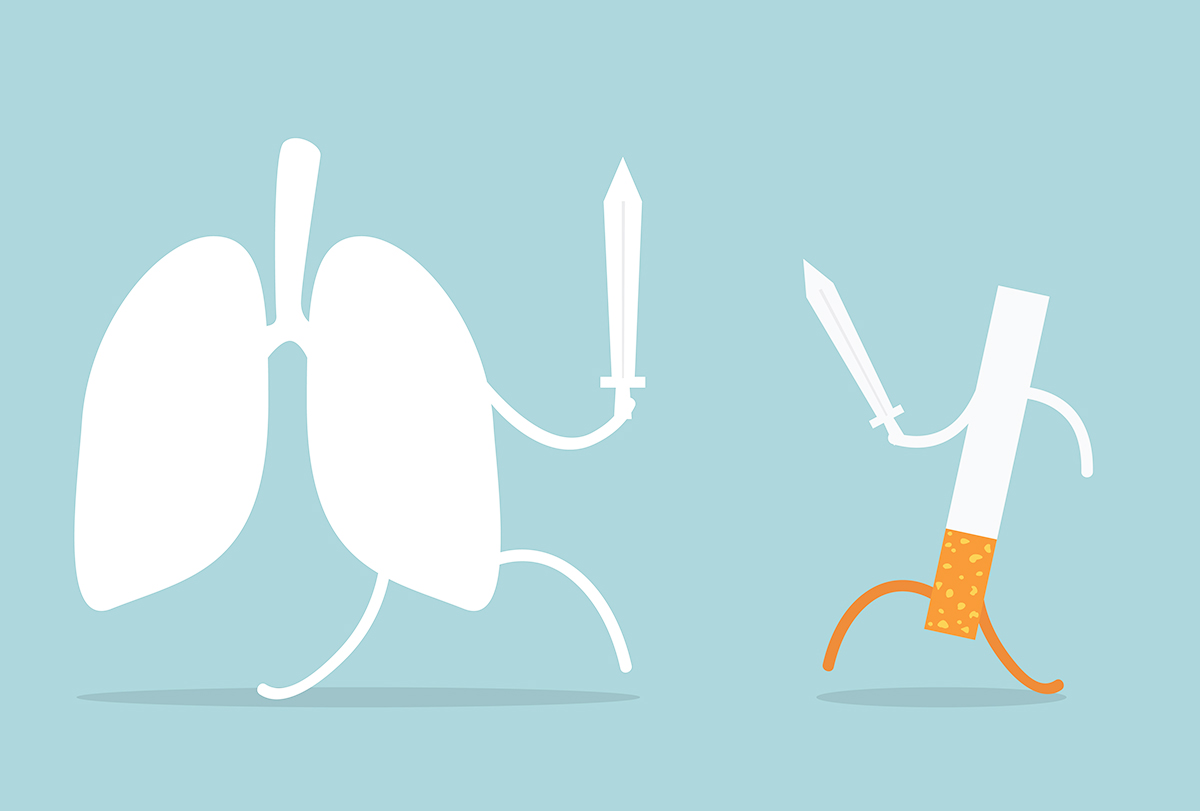 Smoking can affect almost all organs in the body. This article talks about the different ways in which smoking affects your general health and lifestyle.

How Does Smoking Affect Lung Health?

Each puff of cigarette smoke contains >1,014 oxidant molecules and >1,000 xenobiotics. (2) Exposure to cigarette smoke evokes significant biologic changes in the airway epithelium, (3) even though many smokers are phenotypically normal.

Smoking, or exposure to secondhand smoke, (1) affects the respiratory system at microscopic levels:

Cigarette smoking is also associated with an increased risk of several types of infection, (6) including tuberculosis, pneumococcal pneumonia, meningococcal disease, influenza, and the common cold.

In asthmatics, tobacco smoke can trigger an episode. (7) Also, smokers are 12–13 times more likely to die from COPD than non-smokers. (8) However, quitting smoking has an immediate benefit to the lungs. (9)

Effects of Smoking on the Different Parts of the Lungs

The chemicals present in cigarette smoke pose changes in different parts of the organ of breathing.

One of the consequences of smoking is the associated reduction in mucociliary clearance. (10)

Mucociliary clearance is a vital defense mechanism against inhaled pathogens and particulates. It works by cleansing the airway surface through the coordinated action of the cilia.

Smoking may cause damage to the cilia, reduce cilia beat frequency, and also affect cilia length, all of which result in reduced mucociliary clearance. (10)

Airway mucus plays an important role in host defense mechanisms as a physicochemical barrier to inhaled particles and gases, bacteria, and viruses.

However, the overproduction of mucus is harmful, which is a distinguishing feature of chronic inflammatory airway diseases. (12)

Cigarette smoking is the leading cause of COPD. Oxidative stress plays a key role in smoking-induced abnormal airway mucus production, which can lead to the formation of mucus plugs. (13) Smoking also causes goblet cell hyperplasia. (14)

Cigarette smoke contributes to or exacerbates airway diseases, such as asthma and COPD, where airway hyperresponsiveness and airway smooth muscle proliferation are key features.

While factors such as inflammation contribute to asthma, airway smooth muscle proliferation is one of the key pathological changes in asthma. (15)

The mechanisms by which cigarette smoke affects airway smooth muscle are still being investigated. (16) However, oxygen radicals generated as a result of cigarette smoke exposure might be causative of increased lung cell proliferation.

Chronic tobacco smoking leads to a definite tendency to narrowing of both the large and the small airways.

Emphysema, characterized by the enlargement of alveolar spaces, together with the destruction of alveolar walls, is classically believed to develop when mediators of tissue injury exceed the protective mechanisms within the lung. (17)

Far and away, the most common cause of pulmonary emphysema is cigarette smoking. (18) Cigarette smoke causes an inflammatory response in the lower respiratory tract that can damage lung structures.

Smoking is the number one cause of COPD deaths and lung cancer. Exposure to cigarette smoke has various detrimental effects on the lungs, ranging from reduced mucociliary clearance to altered DNA modification. Therefore, to prevent such complications, it is best to quit smoking altogether.