Living with lung cancer is one of the hardest battles one can fight, but it has made me stronger than ever before. I fight every day to live, to beat this deadly illness, to be strong, to inspire and motivate many of my cancer brothers and sisters. Here’s my story. 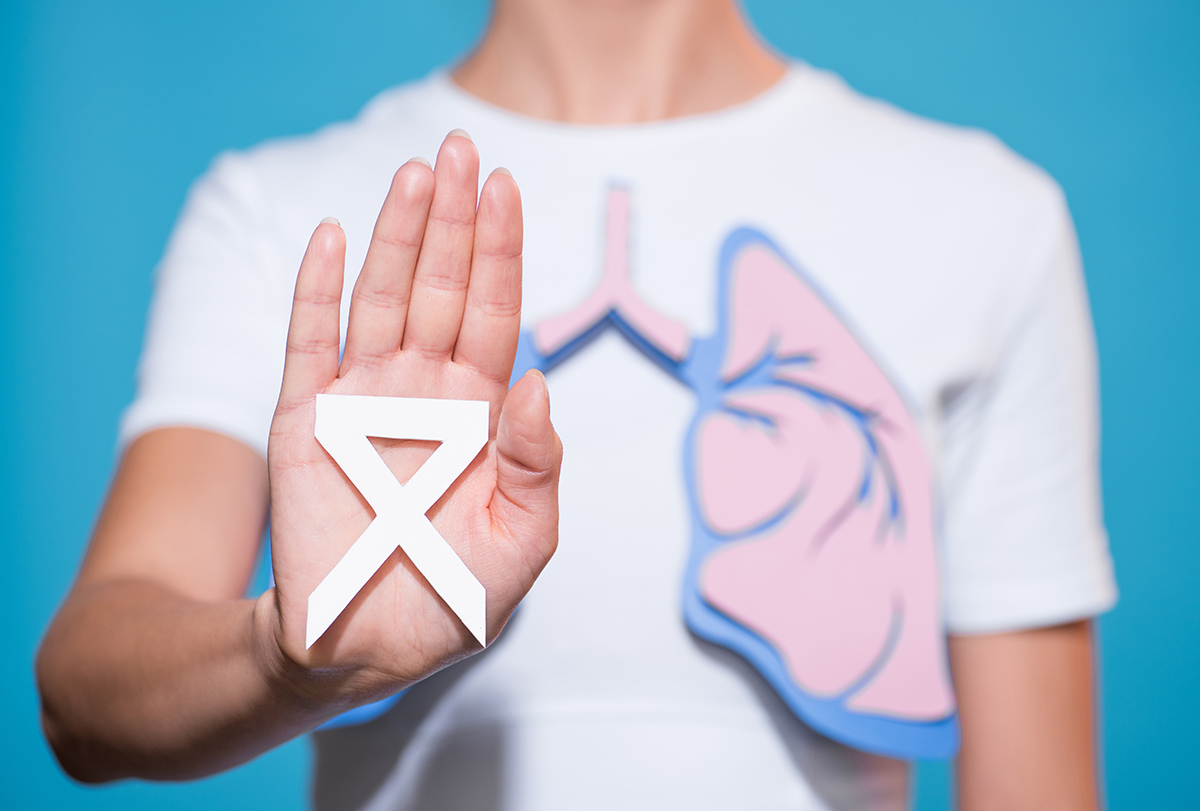 My First Signs of Lung Cancer

In June of 2014, I started wheezing, and throughout the summer, it continued to get worse. Around the end of August, I had already developed a cough and it was getting worse. I couldn’t finish a sentence without coughing.

Getting the Bad News

I went to my family doctor in September for my persistent cough, after which she did a chest X-ray and blood work but the results came out normal. I was diagnosed with asthma and prescribed an inhaler and prednisone.

By the end of October, it was so bad I went to see a pulmonary specialist. My doctor noticed that my right lung looked enlarged but was not concerned and still diagnosed me with asthma and changed my medication.

By the following week, I had tightness in my chest and shortness of breath. (1) I ended up in the ER, where they performed many rounds of tests, which were still coming back negative until they performed a CT scan. That is when they noticed something and admitted me to the hospital.

The next day they did a bronchoscopy, and two days later I was diagnosed with stage 3B NSCLC Adenocarcinoma after months of wheezing and developing a non-stop cough. (2)

I was shocked and in disbelief. Being naïve about the disease, the first thing I said was, “I didn’t smoke.” Then I was told you have non-smokers. That’s the day my husband and I started educating ourselves about lung cancer to fight it.

I was in shock; I was scared, and I thought I was dreaming. I couldn’t believe it. In my opinion, a lung cancer diagnosis was impossible because I don’t smoke and never smoked, but that’s the stigma everyone has.

I lived in fear for months, not knowing if I’ll see my next birthday or see my children grow. I was angry that I got lung cancer. Then, I became depressed and sad and kept saying, “why me.”

It was very hard to comprehend, but I’m a strong woman, so I knew I had to fight and stay positive in order for me to beat this demon called lung cancer.

How My Cancer Was Treated

I went to the Cancer Treatment Center of America in Zion, Illinois, where I had multiple rounds of traditional chemotherapy of cisplatin and etoposide and radiation, (3) as well as biomarker testing.

I had radiation every day for about 7½ weeks and chemo every 2 weeks for about 7-½ week as well. During this time, I developed radiation pneumonitis and was prescribed steroids.

Six-eight weeks later, my doctor confirmed I was ALK-positive. I continued my treatment, but at the University of Chicago, where, in March 2015, I was prescribed Xalkori. My tumor immediately shrunk.

After chemo, in July 2015, I went for a second opinion and started on Targeted Therapy. It worked for about 3 months, then I had progression, and my Targeted Therapy was switched to Zykadia when the CT scans showed a small lesion on my liver.

Since then, my dosage of Zykadia has lowered, and to this day, I continue to take Zykadia. No cancer in my right lung or liver, but still some cancer in my chest lymph nodes, which is stable.

The Most Challenging Part of My Cancer Treatment

The toughest part of treatment was the inability to keep my food down. I couldn’t eat at all; it was horrible. My husband was so stressed out because I needed to eat for strength, and I just couldn’t. But we got through that challenge together.

I remained positive and surrounded myself with positive people. I lived in the moment and enjoyed every single day. I spoke nothing but positive things and tried healing into existence. I’m grateful for everything, especially the smallest things.

What Kept Me Hopeful and Motivated Throughout the Treatment

This might sound crazy, but my journey battling lung cancer has been a blessing. It made me the mighty woman of God that I am today. I’ve gotten closer to God, and I’ve grown in my faith and love for him.

I read my bible, went to church twice a week, participated in bible study, and began to learn how our Lord works and his promises to us.

I started growing spiritually and continue to grow. I knew in my heart I was going to live a long life, and I have a purpose, and that purpose is to do HIS will and educate and bring awareness about lung cancer and God’s healing.

The cancer also made me look at life from a different perspective. I enjoy the little things, and I don’t take anything for granted. I enjoy life to its fullest, and I don’t let any negative energy into my life and home.

Yes, there are storms that we all must go through in life, but I’ve learned that those storms just make you stronger, so I leave it in God’s hand and let Him be in control.

The second best blessing I’ve received is that I BECAME A GRANDMOTHER. I was here to meet my beautiful granddaughter Leyana Julia, Julia after her great grandmother, my mother, who passed away in 2017.

My beautiful granddaughter is now 2 years old, and I’m so thankful and blessed that I’m here to see her turn 2.

The Greatest Lesson Cancer Taught Me

Don’t undermine your health, it’s all you have. Never take it for granted! You know your body better than anyone else. If something isn’t feeling right, get it checked out. It’s better to be safe than sorry.

Don’t wait until it’s too late, and if nothing shows up in an X-ray like me, request a CT scan. If they don’t want to do a CT scan, demand it, or go to another doctor that will.

My Message to Other Cancer Patients

I’m a lung cancer advocate now, so I do everything in my power to bring awareness, educate, and stop the stigma.

Every person that I meet that has just been diagnosed with lung cancer, I tell them NEVER GIVE UP, there’s HOPE, and give it one hell of a fight, and don’t back down because you can beat this.

Stay positive and speak life and healing over you and this awful disease. REMEMBER NOTHING IS IMPOSSIBLE, look at me – I was healed, and I will do it again. I’m victorious and a former business owner after lung cancer! Anything is possible with faith as small as a mustard seed. Just BELIEVE!