Home > Nutrition > Health Benefits of Saffron and Its Side Effects

Health Benefits of Saffron and Its Side Effects

Saffron comes from the threads of the Crocus sativus flower. It is harvested by hand, and it takes 75 flowers to make one ounce of saffron, making it one of the world’s most expensive spices. (1) 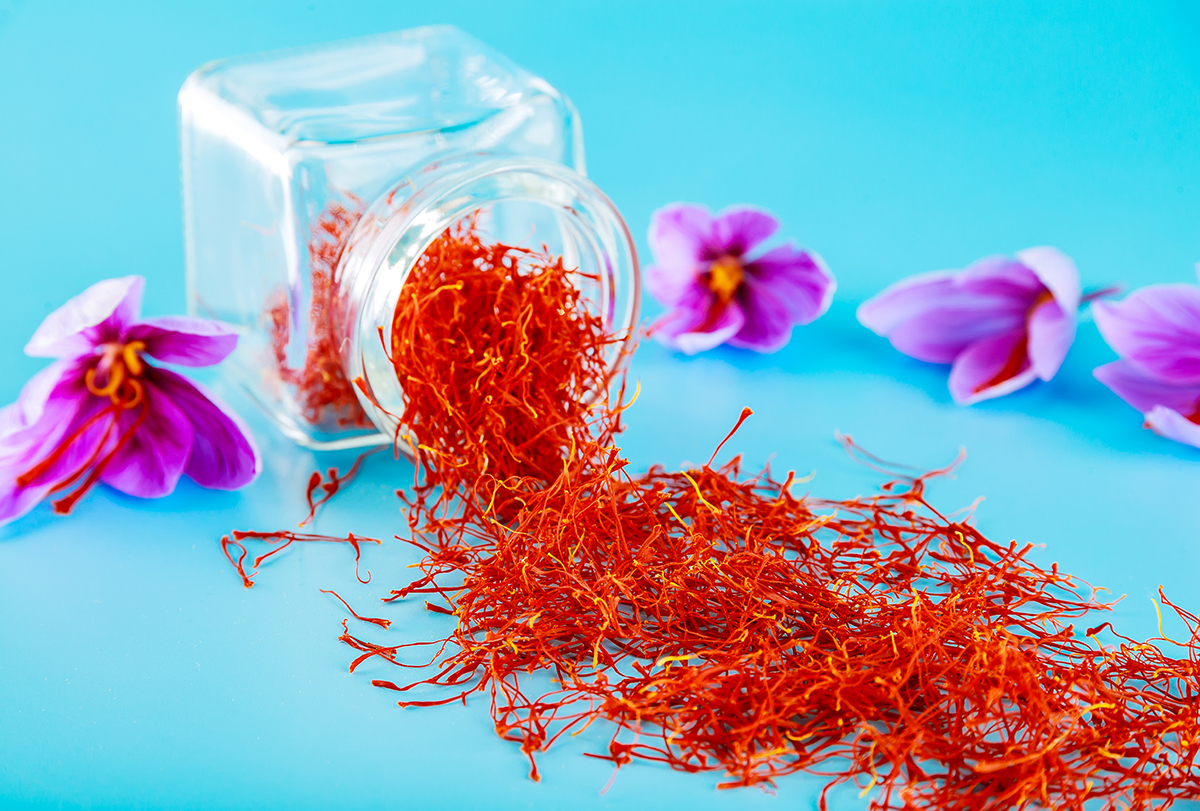 The use of saffron dates back thousands of years to the Middle East and Mediterranean regions where it was added to opioid preparations to treat pain.

In Ayurvedic medicine, saffron is used as an adaptogen, helping the body handle stress. Its use in folk medicine and eastern medicine is well reported for menstrual cramps, asthma, and liver disease. (2)(3)

Saffron contains hundreds of compounds, including high amounts of antioxidants such as carotenoids, zeaxanthin, α- and β-carotenes, and lycopene, giving it many potential health benefits.

Here are some conditions where saffron is believed to be beneficial.

As oxidative stress is suspected to be a factor in the development of Alzheimer’s disease, the antioxidant properties of saffron could provide treatment.

A small double-blind study was conducted on patients with mild to moderate Alzheimer’s disease, and the participants were treated for 16 weeks with either a saffron supplement or a placebo. After 16 weeks, the group receiving saffron performed significantly better on cognitive tests than the placebo group. (4)

However, there is insufficient clinical data to support claims that saffron may be used to treat cancer. More human studies are needed.

Adults with self-reported poor sleep who received saffron reported greater improvements in sleep quality than those receiving the placebo. This study only looked at 55 adults, so more research using larger sample sizes is needed. (8)

Several recent studies have looked at whether saffron or any of its components can improve metabolic syndrome, diabetes, or heart disease. Scientists are studying whether saffron supplementation can improve fasting blood glucose levels, HbA1c, lipid levels, and blood pressure.

In one literature review, the authors reported that saffron appears to lower fasting blood sugar levels, but they cited that many studies to date have been small or of poor quality and that further large-scale trials are needed. (9)

A small study in Iran demonstrated possible anti-obesity properties in subjects given either saffron aqueous solution or one of saffron’s bioactive compounds, crocin. (10)

But in general, saffron’s effect on other biochemical data and its use in the treatment of metabolic syndrome, diabetes, and heart disease have yet to be proven in long-term studies on humans.

Ingredients in saffron may be candidates to treat eye inflammation and mild-to-moderate age-related macular degeneration and glaucoma. (11)

A study on 100 adults over 50 years of age with age-related macular degeneration showed modest improvement in visual acuity after receiving oral saffron supplementation. (12)

Another small study has shown that saffron supplementation may decrease intraocular pressure in patients with a type of glaucoma. (13)

The complex, earthy flavor of saffron makes it compatible with both sweet and savory dishes. It is most commonly used in rice dishes and desserts. It pairs well with other spices such as vanilla, cinnamon, and cumin and imparts a vivid yellow coloring in whatever food it is added to.

Saffron tea is popular in some cultures. To make saffron tea, add 10–12 threads of saffron to 3–4 cups of simmer water and steep for 15 minutes. Some people prefer to add warm milk to the tea to reduce any bitter taste.

Saffron is safe in amounts usually consumed in the diet. It is suspected to be safe when taken as a supplement for up to 6 months, but it is important to check with your doctor or health care provider before beginning any supplement.

People with bleeding disorders and pregnant women should not take supplemental saffron. Very high doses of saffron can lead to poisoning and death.

Side Effects of Saffron Supplements

In rare cases, saffron supplementation may trigger the following side effects.

Some people have reported experiencing discomforting but non-serious symptoms after starting saffron supplementation, such as:

As discussed earlier, saffron is known to exhibit antidepressant properties when taken in recommended amounts. It improves the way your body metabolizes serotonin, a hormone that plays a central role in mood regulation.

Although serotonin rush is usually a good thing as it uplifts your mood instantly, your body may take some time to adjust to the sudden shift especially if you suffer from bipolar disorder. This can trigger anxiety, agitation, and impulsive behavior until your body stabilizes enough to take back control of your serotonin levels.

Saffron can cause an allergic reaction in some people, which can be traced back to an aeroallergen or the carotenoids found in it. These adverse reactions usually affect the respiratory system and trigger symptoms such as hives, nasal congestion, and breathing problems.

Childbearing women are strictly advised against consuming saffron in medicinal amounts as it can shrink their uterus and induce complications or a miscarriage. However, they can safely enjoy saffron in their normal diet.

The possible ill effects of taking saffron supplements on lactating mothers are still not properly understood, but it’s best to err on the side of caution and avoid it until you are done breastfeeding for good. This is because you can end up transmitting the toxicity to your baby via your milk.

Epidemiological studies demonstrate that compounds in saffron may provide protection against inflammation and diseases such as cancer, Alzheimer’s disease, and depression. (14)(15)

Even though there is interest in the medicinal uses of saffron and studies on its use have increased in the past several years, most of these studies are conducted in test tubes or on animals, so more research is needed using large human trials before saffron can be recommended to treat these medical conditions.

Always, always consult your doctor before starting the medicinal intake of saffron to avoid any undue complications later.