Home > Nutrition > Types of Eating Disorders, Their Health Effects, and How to Get Help

Types of Eating Disorders, Their Health Effects, and How to Get Help

People usually have a reductive understanding of eating disorders, dismissing them as unhealthy food choices that are voluntary and can easily be overcome. But that is far from the truth. 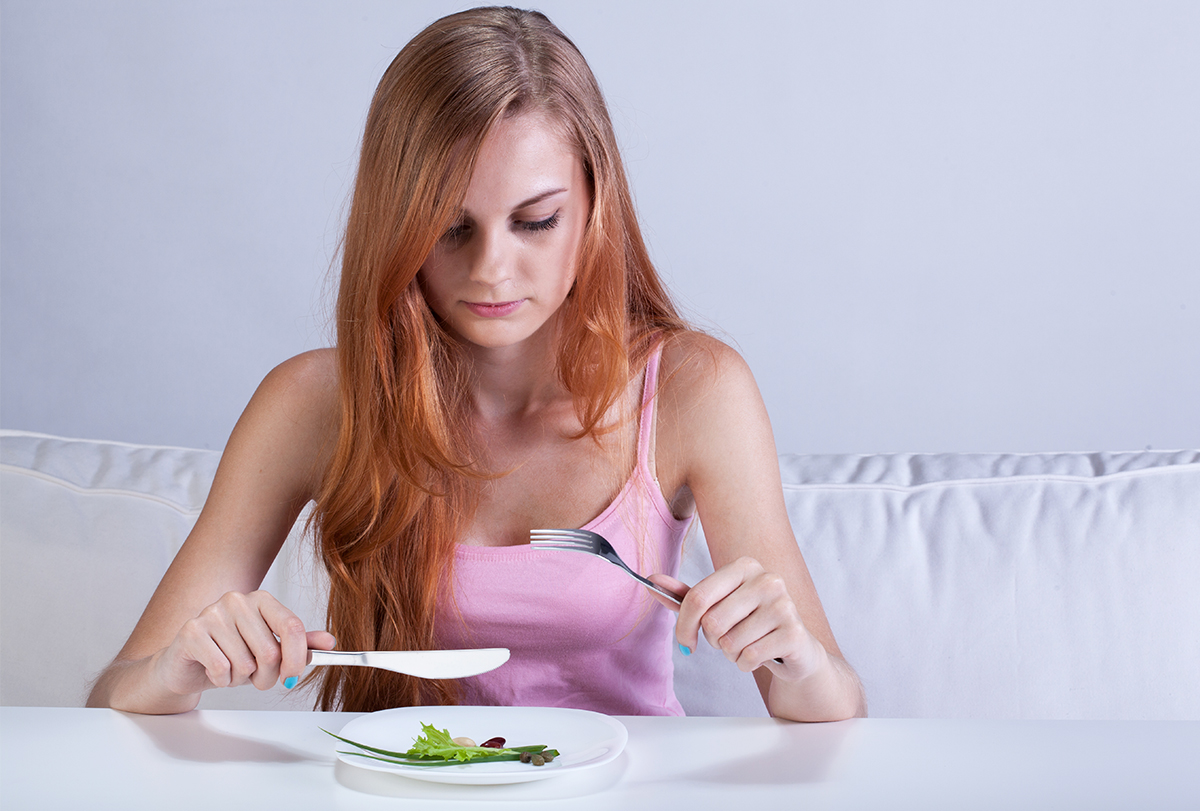 The National Institute of Mental Health describes eating disorders as quite serious and potentially fatal if not managed properly. They are abnormal eating behaviors stemming from a problematic relationship with food.

Many different factors can make you very preoccupied with food, body weight, and physique, paving the way for eating disorders. Some of the most prevalent ones include binge eating, anorexia nervosa, and bulimia nervosa. (1)

Eating disorders show different symptoms depending on each individual. Binge eating, purging, laxative abuse, fasting for weight loss, excessive weighing, obsessive tracking of food, and extensive exercise are all examples of trends in those with eating disorders.

Body size and gender can also play a role in how symptoms appear. For example, against popular belief, about 1 in 3 people struggling with an eating disorder is male. (2) Due to stigma, men in the United States are much less likely to seek help. (3)

Overall, eating disorders are represented in many shapes, sizes, ages, and genders.

Effect of Eating Disorders on the Body

Unfortunately, eating disorders have a devastating effect on all organs and systems within the body. They affect not only mental health but also physical health.

Some of the damage that occurs in the body includes the following:

1. Damage to the cardiovascular system

When severe caloric restriction takes place, the body starts to break down muscle for fuel. This includes the heart, which can be argued as one of the most important muscles in the body.

Blood pressure starts to drop, and so does the pulse, as the body has a limited amount of “fuel” to function at peak performance. (4)

The brain relies on fat to be able to function. The neurons in the brain require insulation to send electric pulses through; the insulation comes from intakes of healthy fats.

When there is inadequate insulation covering the neurons, the hands, feet, mouth, and other parts of the body start to tingle, which is also known as neuropathy. Neuropathy appears differently in each person’s body from a “pins and needles” effect to pain and a heightened sensitivity to both hot and cold temperatures.

3. Damage to the kidneys

Dehydration or repeated drastic shifts in hydration levels can cause damage to the kidneys. (5) Any electrolyte disturbances, which can be caused by binging and purging, can lead to seizures, as well as severe muscle cramps.

Sodium, potassium, calcium, bicarbonate, and magnesium are all examples of electrolytes that may be altered during fasting, purging, or excessive laxative use.

4. Damage to the endocrine system

The last major body system affected by eating disorders is the endocrine system, which regulates hormones such as thyroid hormones, estrogen, and testosterone. The body produces these hormones from the fat and cholesterol that is consumed.

Lowered hormone levels can lead to lack of or irregular menstruation. It can also lead to damage of the bones such as osteoporosis, where the bone starts to have small fractures, leading to eventual breakage or shrinkage. On the opposite side, binging can lead to a poor insulin response, which can lead to type 2 diabetes.

Extreme restriction of calories will lead to a lower resting metabolic rate, which means that the body will burn fewer calories in a resting state. (6) A slowed metabolism starts to drop the core temperature, leading to wasting of the muscle and potential hypothermia. Overall, these side effects are very serious and can lead to permanent damage in the body.

Always remember signs and symptoms can appear differently or not show at all depending on the individual.

Anorexia nervosa is an eating disorder where the individual sees themselves as overweight although many times they are not. (8) Some symptoms include extreme restriction of calories, obsessive weighing, and many classifications of “no-no” foods.

These “no-no” foods or rules can be anything from never eating any liquid calories such as a latte, never eating out at restaurants due to lack of control of what’s in the food, or avoiding all carbohydrate-containing foods, in fear these will all lead to weight gain.

Other symptoms include relentless pursuit of weight loss, fear of gaining weight, and body distortion. Body dysmorphia is when a person cannot stop thinking about perceived flaws in their appearance such as checking the mirror often or seeking reassurance from others. (9)

Although social media does not cause body dysmorphia, it can trigger it. The constant viewing of others’ “perfect” life and filters have left people feeling inadequate of how they look.

Anorexia nervosa has the highest mortality rate among all mental disorders according to the National Institute of Mental Health.

Bulimia nervosa is classified as recurrent episodes of binging and then purging to counteract the excessive intake. Purging varies from vomiting, excessive exercise, using diuretics, or fasting.

Those who suffer from bulimia nervosa can be underweight, at a healthy weight, or overweight. (10) Symptoms include damage to the enamel of the teeth, acid reflux disorder (also known as GERD), and irritation of the bowels as a result of laxative abuse.

Dehydration and electrolyte imbalance are most common in this classification of eating disorder due to the repeated purging in the body.

Binge eating is when an individual feels “out of control” when eating, leading to eating excessive amounts. Symptoms include eating alone, feeling ashamed of what you have eaten, and eating large quantities in a short period potentially when not even hungry.

Although binge eating disorder is not followed by any kind of purging such as vomiting or extreme exercise, it is the most common type of eating disorder in the United States according to the National Institute of Mental Health. (11)(12)

There is no one specific cause of a chain of actions that lead to an eating disorder.

A variety of factors, such as genetics, can potentially lead to eating disorders. However, researchers have not found a specific gene with strong-enough evidence to state that a person found with this gene would have a very likely chance of developing an eating disorder.

Other risk factors include biological, psychological, and emotional health.

Chemicals in the brain such as serotonin and tryptophan can influence the chances of having an eating disorder. Serotonin is a hormone involved in binging behavior in those with bulimia. (13)(14) People with this disorder often binge on carbohydrates, which release sugars inside the body that are finally converted into tryptophan through a multistep process.

The body then uses tryptophan to make serotonin, a hormone that plays a critical role in promoting satiety, appetite regulation, emotional control, judgment formation, and overall mood stability. When your brain is low on serotonin, it will seek more of it in an attempt to make you feel better. Thus, carb cravings in bulimics may be triggered by low serotonin levels in the brain. (15)

Researchers from the University of Pittsburgh also found that those being treated for bulimia continue to have a low amount of serotonin. (16) As for anorexia, research has found that those who suffer from anorexia actually have an overproduction of serotonin, potentially leading to stress and anxiety. (14)

Cortisol, a hormone that is released when the body undergoes stress has been found in both those who suffer from anorexia and bulimia, although there is no causation of high cortisol because researchers are unsure if high cortisol levels are a result of an eating disorder or there is abnormally high cortisol before.

Leptin, a protein hormone commonly known as the “satiety” hormone, also plays a role. Satiation is the feeling of “fullness” after eating, which signals your brain that you should stop eating. Leptin also regulates energy levels to help the body maintain a healthy body weight.

The leptin levels of those undergoing treatment do not return to normal immediately as healthy balanced eating patterns are established. On average, it takes about 6 months for leptin levels to learn when you are “full” at an appropriate level through treatment.

Personality traits may play a factor in a progression of an eating disorder. Perfectionism and comparison against society standards tend to be the most common traits.

Being emotionally unstable and having obsessive tendencies can also lead to the development of an unhealthy relationship with food that eventually takes the form of an eating disorder. But by and large, there is no official mix of traits that are found in all people who struggle with eating disorders.

Family relationships also contribute to the onset and progression of eating disorders.

According to the research conducted by the Gulf Bend Center, living in an overprotective, success or perfection oriented, or rigid family environment can make you feel stifled. The constant stress of meeting unreasonable expectations can make you adopt unhealthy coping mechanisms, which include eating disorders. (17)

Other family influences could come from those who have suffered any trauma, such as abuse or living with parents who abuse substances such as alcohol or drugs. Overall, there is no known cause of eating disorders, just potential factors that can influence it.

Is It Important to See a Dietitian When Suffering From an Eating Disorder?

A registered dietitian is an important part of recovery, but other health professionals are also important. A psychiatrist, a dentist, an endocrinologist, and other medical professionals play a huge role in recovery.

Having support in your life such as family and friends who are aware of your condition and are supportive is very valuable as well. If you are not ready for that or would like additional support, in-person and online support groups are available to join and maintain accountability throughout the process.

The National Eating Disorders Association has a search tool under the “Support Groups and Research Studies” tab that will allow you to find ones near you. It is believed that all types of professionals are vital to recovery, but getting diagnosed is the first step. This way, a medical team can identify where you are in the process and can best formulate a treatment plan that supports your needs.

Eating disorders can occur in anyone despite age, gender, socioeconomic factors, and age. These disorders are not a choice and should not be treated as such. Do not be afraid to seek professional help or share your struggle with loved ones.

You can contact the National Eating Disorder Association through a phone call, text, or chat on the following:

If you or someone you know is in crisis and needs immediate help, call the toll-free National Suicide Prevention Lifeline (NSPL) at 1-800-273-TALK (8255), which is available 24/7.