Tinospora cordifolia has long been a part of traditional Indian medicine and is considered to be an Ayurvedic herb. It is more commonly known as giloy, Guduchi, or heart-leaved moonseed. 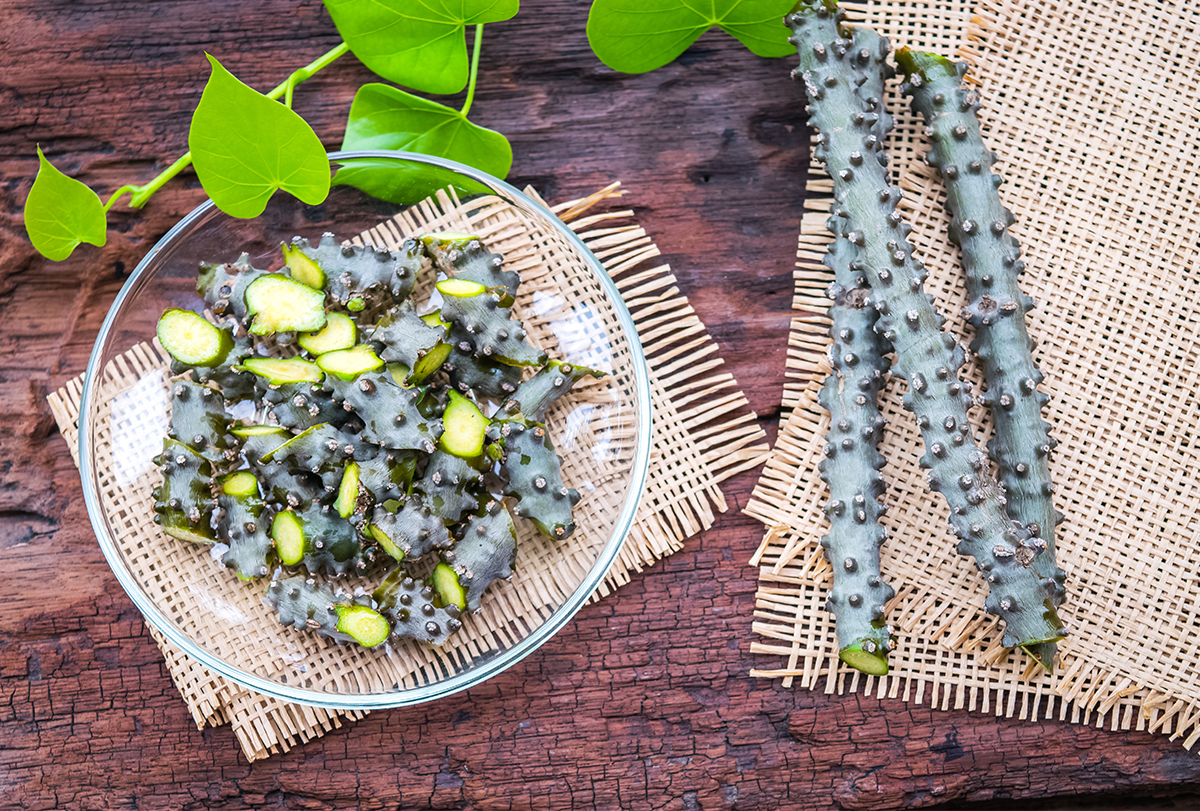 This herbaceous vine belongs to the Menispermaceae family. It is found in tropical countries, including India, Bangladesh, Sri Lanka, and Myanmar.

This large climber grows in high altitudes, typically having greenish-yellow flowers that bloom through summers and winters. The female flowers are singular, whereas the male flowers appear in clusters. The plant has simple, alternating leaves, which are often used to prepare a tonic tea.

The plant is genetically diverse, containing different active components, including steroids, aliphatics, alkaloids, glycosides, and diterpenoid lactones. These active compounds are distributed over all parts of the plant, such as the root and stem.

Due to its recently reported medicinal properties, T. cordifolia has gained interest among researchers. (1) Besides its therapeutic properties, the plant also provides multiple essential minerals, such as iron, copper, manganese, calcium, zinc, and phosphorus.

Does the Plant Work?

However, most of the research has been conducted in vitro or on animals. There is not much evidence on the effects of T. cordifolia on humans. (2) Thus, more extensive human trials are needed to establish the use, safety, and efficacy of this plant as clinical medicine.

T. cordifolia, also known as Guduchi or giloy, is believed to have various health benefits.

The plant has been used for treating hay fever and alleviating cold symptoms such as runny nose and congestion. (3)(4)

A couple of review papers and studies supported the use of T. cordifolia in managing hay fever. However, these studies are old, thus leaving space for newer trials and research to establish this claim.

2. May act as an immune balancer

Some animal studies demonstrated the role of T. cordifolia in immune response balancing and enumerated its use in improving neoplasm, chronic infections, and allergic reactions. (6)(7)

Many factors contribute to allergies. T. cordifolia could help strengthen the immune system to aid in allergy relief, but more large-scale clinical trials are needed for conclusive results.

Giloy has various other potential uses. However, due to a lack of human studies, these uses are not yet established. Here are some of the possible benefits of T. cordifolia:

Preliminary evidence supports the use of T. cordifolia in managing diabetes by decreasing the absorption of sugar-derived carbohydrates in the body. It may also aid in the reduction of nephropathy and retinopathy. (8)(9)

Some studies demonstrated a positive effect of T. cordifolia in reducing the symptoms of osteoarthritis. (10)(11)

The topical use of T. cordifolia may help in scabies treatment. (12)

The plant may help improve the physical performance of an individual. (13)

Animal studies conducted using the leaves and stem extracts of T. cordifolia showed its anti-toxic effects. The oral administration of the plant extract is also potentially useful in preventing toxicity. (14)(15)

Certain animal studies found T. cordifolia to be fairly helpful in reducing serum lipid levels and improving HDL levels. Thus, this herb may benefit those who are suffering from diet-induced high cholesterol levels. (16)

Dosage and Consumption of T. cordifolia

Not much research has been conducted to establish the correct dosage of T. cordifolia.

Different experimental dosages of T. cordifolia have been used in various trials, but there is no consensus regarding the best dosage, which will deliver the highest therapeutic value minus the side effects.

Thus, scientists have to conduct more trials to come up with a standard medicinal dosage of this herb. T. cordifolia can be consumed in multiple forms, including powder, juice, and supplements, but you must consult your doctor before using any of these products.

Safety of the Plant

There aren’t enough studies to confirm the safety of T. cordifolia for pregnant or breastfeeding women, so it’s best to err on the side of caution and avoid its use.

Moreover, this plant is known to stimulate the immune system, which can cause flare-ups of autoimmune diseases such as rheumatoid arthritis. (17) So, before you take a supplement, consult first your healthcare team.

T. cordifolia may affect the action of certain medications, including:

Because T. cordifolia can lower blood sugar levels, combining both medications might cause a significant dip in sugar levels. Therefore, it is important to take advice from your doctor before consuming T. cordifolia with anti-diabetic drugs.

Due to its immune-boosting properties, T. cordifolia can suppress the action of immunosuppressants, which are drugs taken to lower immune system activity.

Tinospora cordifolia has several suggested medicinal benefits and has long been used in Ayurvedic medicine. However, there is a need for more studies to establish the efficacy of this plant for treating diseases and improving health.

Results of previously held studies also support the need for further research. Large-scale and in-depth research can help establish the use, dosage, and safety of T. cordifolia and explore its possibilities in clinical treatment.