How Does Smoking Affect Heart Health?

Cigarette smoking damages every aspect of your health. While it’s typically associated with lung problems, it can cause serious cardiovascular damage as well. 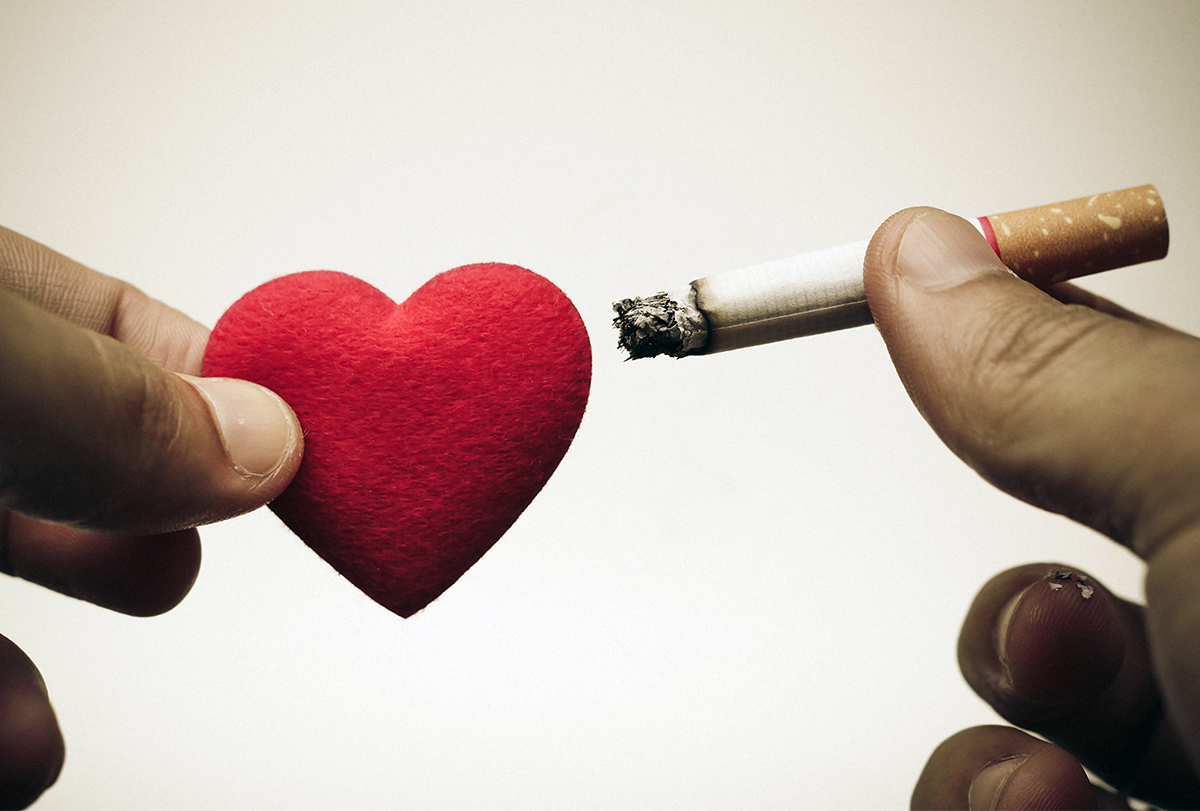 Smoking releases harmful chemicals in the body that get deposited inside the arteries, which can disrupt blood supply, invite heart disease, and even increase the risk of cancer.

The Effects of Smoking on Cardiovascular Health

Cigarettes and tobacco products contain a multitude of harmful substances from tar and nicotine to arsenic and lead.

Many of these substances get deposited on the inside walls of the arteries, making them increasingly sticky. The arteries then trap more fatty substances and become clogged over time. This results in restricted blood flow to and from the heart, paving the way for coronary artery disease (CAD), high blood pressure, stroke, and heart failure.

Some of the chemicals found in tobacco smoke are known carcinogens directly responsible for cancer, in particular adenocarcinoma of the lung. The amount you smoke over time has an additive effect.

Physicians measure a patient’s cigarette usage in pack-years, defined as the number of packs smoked per day multiplied by the number of years smoked. For example, smoking 2 packs a day for 20 years equals 40 pack-years.

The more pack-years a person accumulates throughout their lifetime, the greater their risk of cardiopulmonary disease, heart attack, heart failure, and lung cancer. (1)

The most common symptoms that smokers experience signaling that smoking is affecting their heart are chest pain and shortness of breath (SOB). However, smokers can also suffer from stroke as an initial symptom, which is closely associated with heart disease.

The end result of all the harmful effects smoking has on the heart and lungs is that it deprives the heart muscle of oxygen. (2) Just like any other muscle in the body, the heart will “cramp up” if it is not getting enough blood and oxygen, causing chest pain that often radiates to the neck and jaw.

Although many believe that symptoms such as chest pain and SOB are early warning signs of impending disaster, in reality, these signs are late stage. They indicate significant blockage and damage that have been done to the heart and lungs and portend a major adverse cardiac event at any point in the future.

It’s also important to note that diabetics who smoke may not have any symptoms at all until it is too late, with their first “warning sign” being a massive heart attack. Women also tend to have less typical symptoms and may only experience a brief or sharp pain in the chest, back, and arms or only fatigue and/or nausea.

Does Smoking Clog the Arteries?

It is an often lethal condition in which atherosclerotic plaque builds up in the walls of the blood vessels and is responsible for clogging the arteries within the heart. It leads to cardiac arrest in the vast majority of heart attack victims.

Even when CAD doesn’t manifest as an obvious or sudden heart attack, this buildup of atherosclerotic debris in the coronary arteries slowly starves the heart of precious oxygen, ultimately leading to decreased cardiac function, also known as heart failure.

Smoking and the Risk of Heart Attack

Smoking is the number one cause of heart disease and stroke, followed closely by high blood pressure, high cholesterol levels, diabetes, and a sedentary lifestyle.

Statistically, if you are a smoker, your risk of suffering a heart attack or stroke is two to four times that of the general population. (3)

Many of the substances contained in tobacco are what are known as vasoconstrictors. These substances constrict the coronary arteries and the smaller blood vessels of the heart that supply oxygen to the heart muscle itself.

Once constricted from cigarette smoke and tobacco use, these blood vessels often do not relax again for many minutes and sometimes much longer.

This vasoconstriction has an additive effect with existing CAD where the blood flow is blocked by atherosclerosis. This can cause both chest pain and heart attack.

In most people, this chest pain is a warning sign that they are dangerously close to having a life-threatening event such as a heart attack or cardiac arrest. Unfortunately, sometimes the first time someone has chest pain can actually be a heart attack.

So, the bottom line is that there are no guarantees smokers will have any warning that they are going to suffer a major cardiac event. This is especially true in diabetics and in women who smoke.

Don’t Smoke if You Have a History of Heart Attack

Although smoking is a lifestyle choice and is currently legal in most countries around the world, no one who is truly concerned about their health should ever smoke, especially those people already with a history of CAD and a prior heart attack.

The additive effect of CAD and smoking is a lethal scenario almost certain to cause further cardiac damage and a repeat heart attack. People should not smoke for a multitude of health reasons; however, those with a previous heart attack are at extreme risk of death.

How Long Does Smoking Take to Affect the Heart?

Smoking has both acute and chronic effects on the heart. Immediately after one inhales tobacco smoke the vessels of the heart constrict and blood flow to the heart muscle is limited.

In most people, this manifests as an increased heart rate, but in many folks with a long history of smoking or advanced heart disease, this immediate constriction can cause significant chest pain and even heart attack.

Over the long run, years of continued smoking and tobacco usage will most certainly lead to extensive CAD and heart failure. (4)

There are many ways to quit smoking, and they include everything from just quitting cold turkey on your own to enrolling in a smoking cessation program supervised by a medical professional.

Like anything else that is difficult in life, success depends on the individual, their support system, and their environment. Because smoking is both a physical and mental addiction, most people repeatedly fail to “kick the habit.”

The most effective way to quit or help someone quit smoking is to focus on the three main aspects of the problem:

Nicotine replacement products such as gum and transdermal patches do a very good job helping smokers overcome the intense nicotine “cravings” for their next cigarette. Unfortunately, even in gum and patch form, nicotine is quite bad for you, so ultimately, one’s goal is to wean from these nicotine products entirely.

Addressing the mental aspect can be broken down into personal mindset and stress management.

3. Lifestyle and a supportive surrounding environment

Adopting good eating, sleeping, and exercise habits, along with eliminating any elements in one’s environment that trigger cravings to smoke is the key to success.

It is extremely difficult to quit if one remains around or in the presence of other smokers. This means that smokers may also need to change jobs, modify living arrangements, and even alter personal relationships to achieve lasting smoking cessation.

In general, the additive effects of long-term smoking and tobacco use are irreversible.

Some studies show that quitting smoking can allow the heart muscle to partially recover, (6) likely due to the elimination of the constant vasoconstriction of the heart vessels seen in smokers.

Unfortunately, there is no evidence that quitting smoking can reverse the amount of CAD that has accumulated over time. However, quitting smoking, combined with regular exercise and adopting a healthy lifestyle, can improve both the quality and quality of life of former smokers and greatly reduce their risk of suffering a major cardiac event in the future.

Is Vaping Safer Than Smoking Cigarettes?

Because vaping is a relatively new activity for the general population, there is still a paucity of data on its long-term effects on the heart. Most people believe that because vape products are not generating traditional cigarette smoke, they are “safer.”

This is only somewhat true in terms of the risk of developing lung cancer because the main carcinogenic culprits are not present in vape smoke. However, vape products contain other substances that may also prove to cause cancer. (7)

Despite the data available regarding the harm vape can cause to the heart and lungs, the industry and its marketers desperately want people to believe it is safe and have made an entire new generation addicted to nicotine with their misleading marketing campaigns.

This is nothing short of criminal. Nicotine in any form or by any means of delivery is the same toxic chemical responsible for tobacco addiction and the majority of deleterious effects on the heart.

In addition, vape products often reach temperatures over 300 degrees as they are being inhaled. These vapors remain extremely hot when they reach the very fragile lining of the small airways of the lung.

This repeated scalding of the pulmonary surface causes inflammation and can eventually lead to scarring of the lung and a condition known as pulmonary fibrosis. Because this internal lung surface is directly responsible for oxygen exchange, any damage to it limits the amount of oxygen available to the heart and body.

Just like that caused by cigarette smoke, this combination of vasoconstriction from nicotine and physical obstruction of oxygen by repeated scarring of the lung can lead to heart failure over time.

Heart failure due to irreversible pulmonary fibrosis is one of the few indications for a heart-lung transplant, which, due to organ scarcity and lack of healthcare resources, is available to only a very few people each year.

Here are a few tips to help you quit smoking for good to preserve your heart health:

The best way to quit smoking is to never start; the same goes for vaping. For those already smoking, it is never too late to stop, but it can be very hard. Always look at the bigger picture, and keep reminding yourself of the health gains that outweigh the momentary pleasure of a smoke.

Read up about the dangers of smoking to have a thorough understanding of why it is absolutely essential for you to quit this life-endangering habit. Saying bye to cigarettes can add years to your life.