Blepharitis is a common ophthalmological problem that is characterized by the inflammation of the eyelids. 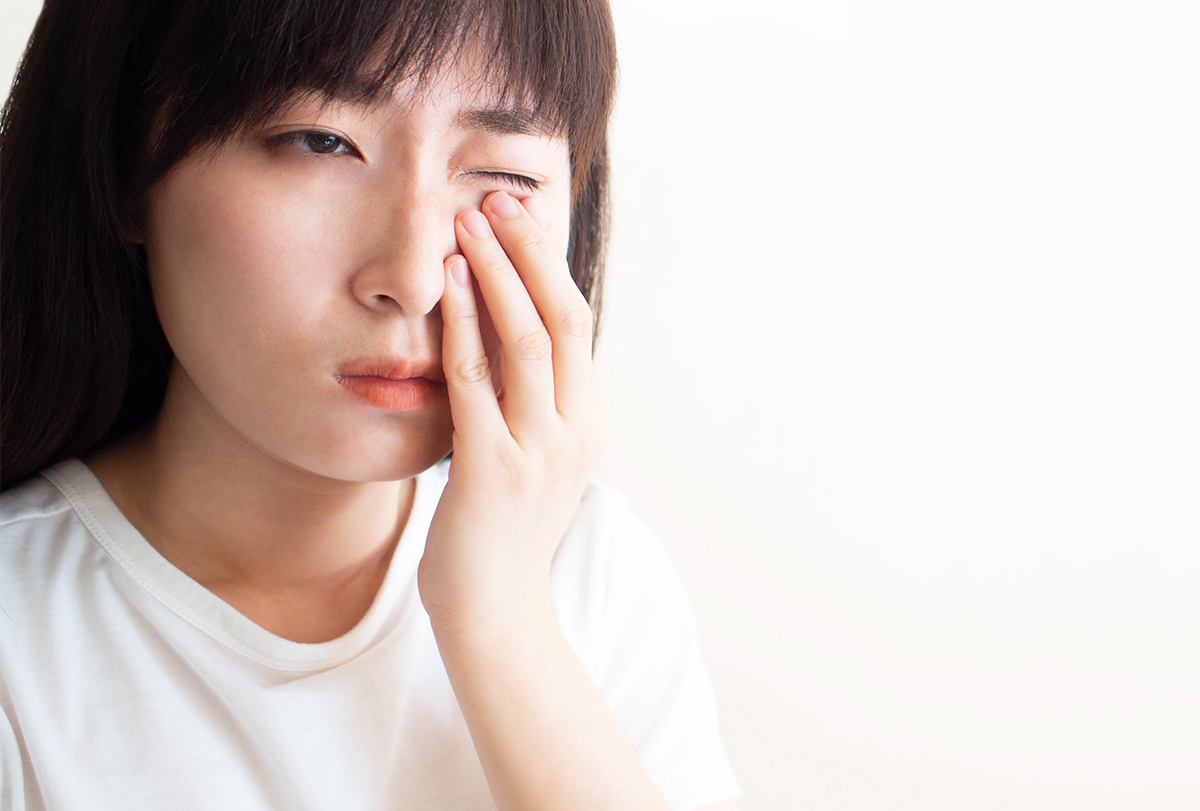 The eyelashes grow out of hair follicles that have small oil glands underneath them, known as meibomian glands. Blepharitis occurs when these subcutaneous glands lining the eyelids become clogged with dust, dandruff, skin cells, or bacteria.

Anyone can develop blepharitis, but it is more common in people over the age of 50 years.

There is no data to reveal the total number of blepharitis cases reported in the United States at a given time. Still, it is considered to be one of the most commonly reported complaints at both the ophthalmologist’s and optometrist’s offices. (1)

Blepharitis can be categorized into two types depending upon the site of occurrence:

The skin at the base of the eyelashes along the outside front edge of the eyelid becomes inflamed. This condition is usually caused by a buildup of bacteria or dandruff in the folds of the eyelids in the absence of proper eyelid cleanliness.

The inflammation is limited to the inner corners of the eyes, where the eyelid meets the eyeball. The condition usually occurs when the meibomian glands do not function properly and do not produce enough oil to keep the eyes well hydrated.

The meibomian glands present under the roots of the eyelashes produce an oily substance called meibum, which forms an impervious layer over the eyes’s tear film.

Blepharitis occurs when the meibomian glands become clogged with dead skin, dandruff, dust, or other debris such that they are unable to lubricate the eyes properly.

Your skin is naturally populated with harmless bacteria, which tend to proliferate rapidly in the absence of proper skin hygiene and accumulate along the margins of the eyelids.

This bacterial buildup can irritate the delicate skin over the eyelids and pave the way for infection. The infected eyelid tends to become red, itchy, swollen, and scaly – a condition called blepharitis.

The excessive growth of bacteria in the folds and crevices of the eyelids leads to the formation of a plaque-like biofilm that serves as fodder for the eyelash mite called Demodex. Excessive parasitic buildup on the eyelids can cause inflammation, especially in people who have compromised immune systems. (2)(3)

Certain medications can give rise to eyelid inflammation as a side effect. (4)

Rarely, an allergic reaction to products used on your eyelids, which include eye makeup, eye medication, and contact lens liquid, can lead to eyelid inflammation.

Signs and Symptoms of Blepharitis

In most cases of blepharitis, the symptomatic discomfort is equally pronounced in both the eyes, but some people may experience greater discomfort in one eye than in the other. The symptoms may come and go but are usually worst in the morning.

The following signs and symptoms characterize a typical case of blepharitis:

Severe blepharitis can lead to the following signs and symptoms:

Prolonged or poorly handled blepharitis can even give rise to secondary infection, especially in people who constantly rub or touch the affected area without sanitizing their hands before and after.

Your doctor may suggest the following treatments to manage blepharitis.

The doctor may recommend topical antibiotics, such as erythromycin and bacitracin, to curb the bacterial overgrowth on the eyelids. Oral antibiotics are prescribed if the ointment fails to provide any relief.

The medication will be tapered off gradually after you overcome the acute phase, which usually lasts for several weeks.

i) Electromechanical lid margin debridement, also known as BlephEx, is a clinical procedure that involves scraping off the debris, bacteria, Demodex mites, and biofilm that form in the margins of the eyelids.

ii) Thermal pulsation treatment is a clinical method that works by melting the debris that accumulated over the upper and lower eyelids through a localized application of heat and adaptive pressure in a controlled setting.

These standard treatments and medications must be accompanied by a daily eye cleansing routine to achieve lasting relief.

Your eye doctor will first review your symptoms and medical history and then perform a close examination of your eyes and eyelids using a special magnifying instrument called the slit lamp to identify any abnormalities in the lid structure, skin texture, eyelash growth, and opening of the meibomian gland.

Through this careful analysis, your doctor will be able to determine the type of blepharitis that you are suffering from and whether another skin condition, such as seborrheic dermatitis or rosacea, is making it worse.

The doctor may also swab test the oil or crust that forms on your eyelid to determine the presence of bacteria, fungi, or evidence of an allergy.

People with any of the following skin conditions have an increased susceptibility to developing blepharitis:

Blepharitis is unlikely to give rise to any serious complication if it is managed properly. However, the eye inflammation can make it impossible for you to wear contact lenses until the symptoms subside.

Besides the general discomfort, blepharitis can lead to the following eye-related problems:

The meibomian gland dysfunction responsible for blepharitis can also make your eyes dry, red, and inflamed – a condition known as dry eye syndrome.

Blepharitis is associated with another similar inflammatory eye condition called conjunctivitis, or pink eye, wherein the thin, transparent mucous membrane covering the white part of the eye and the inner surface of the eyelids becomes irritated or inflamed.

Swelling in any of the meibomian glands can take the form of a cyst, which is usually painless unless it gets infected.

Bacterial blepharitis can lead to the development of a painful pus-filled boil or swelling on the external edge of the eyelid called a stye.

Blepharitis is a chronic condition that can occur periodically. There is currently no cure for blepharitis, but you can effectively manage its symptoms by practicing proper eye hygiene daily along with certain self-care therapies.

However, if your condition fails to improve or becomes worse despite preliminary care, consult an optician (optometrist) to rule out any serious underlying condition.

Can stress lead to blepharitis?

Stress and anxiety trigger the production of stress hormones like cortisol which can negatively influence the functioning of the meibomian glands in terms of how they produce, secrete, and clear any oily material. This can pave the way for blepharitis.

Can eyelids grow back after blepharitis?

Unfortunately, parts of the eyelid architecture that are lost from the chronic scarring of blepharitis usually do not grow back in a normal fashion. These lid irregularities can lead to worsening of dry eye symptoms, so it is important to treat it.

Manuka honey is known for its strong antimicrobial properties, mainly because of its very high concentration of methylglyoxal (MG) compared to other types of honey.

It is a great natural antibiotic to put on wounds and ulcers, but not around the eyes and over the delicate lid tissue.

Is blepharitis curable in the long run?

Blepharitis can be cured with proper treatment and patience on the part of both the physician and patient. This is a form of ocular surface disease that can be especially tough to treat in patients with other dermatologic and/or inflammatory conditions such as rosacea.

Often, treatment involves patient compliance with compresses and hygiene, along with proper eye drops or ointments to prevent infection and decrease the inflammation.

About Dr. Anne Negrin, MD: Dr. Negrin is a board-certified comprehensive ophthalmologist. She sees patients from newborns to senior years. She attended Cornell University and received her MD from New York Medical College.

She completed a year of internal medicine training at North Shore-LIJ Hospital in Manhasset, Long Island, and then completed her ophthalmology residency training at St. Vincent’s Catholic Medical Centers of Brooklyn and Queens.

Dr. Negrin writes regularly on a variety of health and wellness topics, and can also be seen on various TV and cable news shows as a contributing medical commentator. She runs a private practice in Westchester, NY, and is a passionate educator.

Blepharitis is a prolonged struggle as it keeps coming back even after the symptoms resolve. The most you can expect is to successfully manage the symptomatic discomfort and reduce the frequency of flare-ups.

However, you can rest easy knowing that this condition is unlikely to cause any serious damage to your eyes or vision, except for making them look rather unsightly when the inflammation is at its peak.