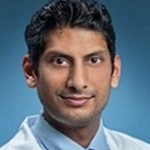 Dr. Vikram Garg is board certified in Rheumatology, Musculoskeletal Ultrasound and Internal Medicine. He received his MD from SUNY Upstate in Syracuse, New York followed by a residency at Scripps Clinic/Green Hospital in La Jolla, California followed by a Rheumatology Fellowship at UCLA in Los Angeles, California. Prior to starting medical school he successfully completed a Masters of Science in Pharmacology at Tulane University in New Orleans, Louisiana. After fellowship, he then joined the Scripps Clinic Medical Group and practiced there for over six years before joining PRA Health Sciences as a medical director.

How to Manage Arthritis in the Hands

The symptoms of hand arthritis can be managed or treated with self-care measures and some home remedies. For this, it is...

Arthritis refers to the inflammation of the joints and occurs due to a variety of reasons. The condition can prevent the...

Osteoarthritis (OA) is the most prevalent form of arthritis caused by the gradual degeneration of joints. It is a progressive disorder,...

Types of Osteoarthritis and How Does It Progress

Osteoarthritis (OA) is a degenerative disorder that targets every structural component of the joint. To say that OA causes wear and tear of...

What Causes Knee Pain and How to Treat It

The knee is the largest joint of the human body and has a complex working structure. It consists of cartilage, bone,...

Back pain is a frequent complaint, often occurring due to the misuse or exhaustive use of the back muscles. It can...

Foot pain is a common problem that often limits your mobility and causes difficulty in walking, thus interfering with your daily...

The foot bears various stresses throughout the day while supporting the weight of your whole body. When combined with various other...

Muscle pain is a common discomfort that afflicts almost everyone at one point or another. It can be the result of...

Muscle pain is fairly common in people of all ages and genders. Regular muscle pain is usually mild enough to be...

Home Remedies to Relieve Back Pain

Back pain is a common and often chronic problem, which can wear your entire body out. This condition tends to be...

How to Reduce Knee Pain at Home

Knee problems are a common occurrence, and the extreme pain can hinder your daily activities, such as walking. Most knee problems...

Apple Cider Vinegar for Arthritis: Helpful or Not?

Arthritis is a broad term that refers to a group of degenerative musculoskeletal conditions whose primary symptom is joint pain with...