Home > Respiratory Health > Cough, Cold & Flu > Reasons Why We Sneeze and How to Manage It

Reasons Why We Sneeze and How to Manage It

An uncontrollable burst of air that comes out forcefully and suddenly via the nose and mouth is termed as a sneeze. Medically known as sternutation, sneezing is part of the body’s natural defense. 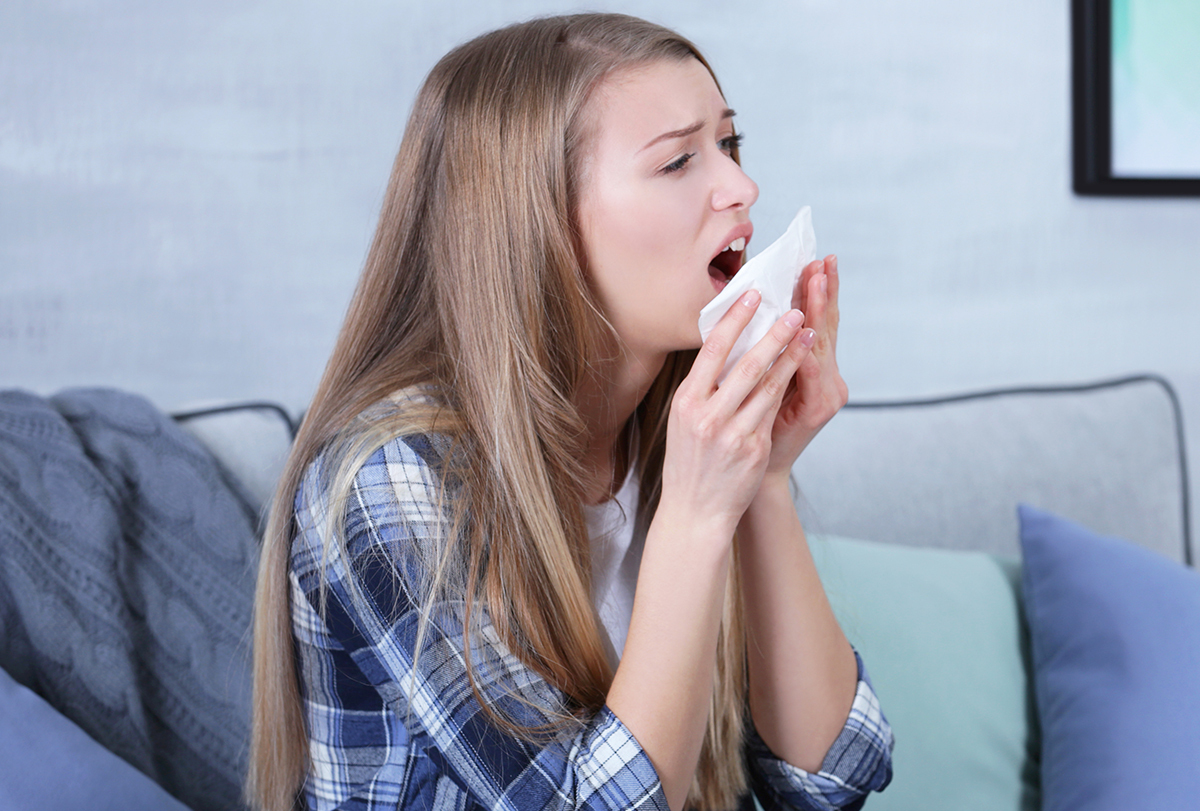 Sneezing helps eject foreign particles in the nose, such as pollen, dust, and other minute irritants, out of the body. This mechanism protects the lungs and other organs from being affected by such particles.

How Do You Sneeze?

The entry of a foreign particle in your nose irritates the nasal lining and produces a tickling sensation in the nerve endings. This interaction generates an electric signal that informs the brain that the nose needs to be cleared. As a response, the brain sends signals to various body parts to prepare for a sneeze.

First, you take a deep breath, which expands the lungs and tightens the chest muscles. As the pressure inside the lungs increases, your eyes close, and your tongue moves to the roof of the mouth.

Finally, the air held inside the lungs is released suddenly with force. All of these happen in just a few seconds.

Sneezing is usually caused by the entry of particles that irritate the mucous membrane in the nose or throat. It may be discomforting but is rarely indicative of a severe problem.

Various factors that can cause sneezing include:

Always cover your mouth while sneezing to maintain hygienic conditions and prevent the spread of germs.

Sneezing can generally be managed by avoiding allergens or triggers. However, medical intervention may be needed when the symptoms do not subside with preventive measures.

Sneezing can be managed in several ways:

The severity and duration of the symptoms help diagnose the cause behind sneezing. These findings are aided by physical examination and patient history, which are major determiners for the diagnosis.

Laboratory tests are generally not required. However, for some cases, direct examination of the nasal cavities may be performed through:

An endoscope, which is a flexible tube with a light and a camera, is used to inspect the septum and lateral nasal wall for any deformity.

This test helps in examining the nasal cavities for swelling in the turbinate, nasal secretions, properties of the mucosal surface, septum position, and ulcerations. It is performed only after inspection without instruments.

Further evaluation through a sinus radiograph (X-ray) or computed tomography (CT) may also be helpful. If allergies are suspected, allergy skin testing or blood testing may be done. If infectious causes are suspected, a nasal or throat culture may be ordered by the physician.

Complications Associated With Holding Back a Sneeze

Holding back a sneeze can lead to various complications, including:

Rarely, a held-back sneeze may also lead to:

Certain unusual medical conditions can also lead to an injury when holding back a sneeze.

Generally, sneezing resolves on its own or through self-care measures. However, if your condition persists for more than a few days and is affecting your lifestyle, you should seek medical attention.

Sneezing is a reflex action that occurs in all humans and is also common among animals. It plays a major role in protecting the body from foreign particles.

While it may be irritating, sneezing is rarely symptomatic of severe disease. Acquiring proper information about this involuntary phenomenon can help in diagnosing other related ailments.