By Marina Kim, DO | Gastroenterologist

Ulcers refer to sores that develop on the inner lining of the stomach or intestine and cause pain. 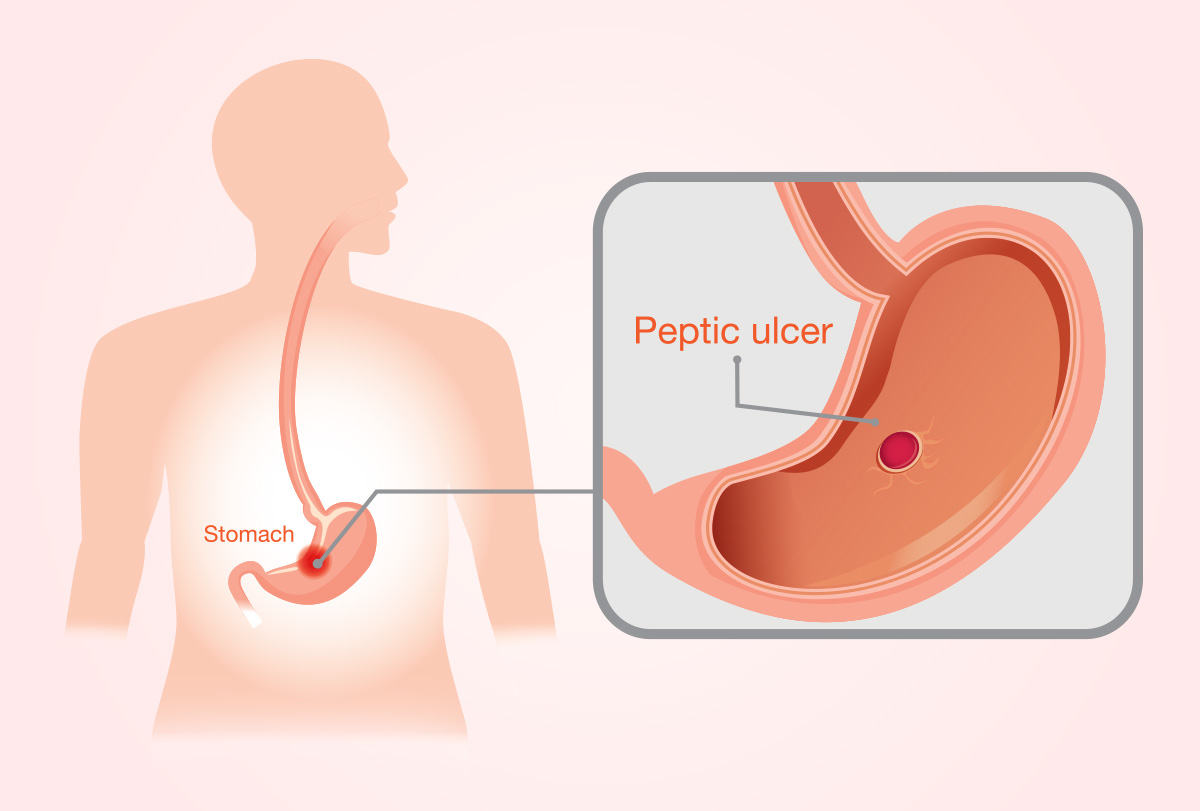 Peptic ulcers are a common problem with a lifetime prevalence of 5%–10% in the United States. The likelihood of getting a stomach ulcer increases with age.

While most ulcers resolve on their own or with simple treatments, frequent and persistent ulcers may indicate an underlying problem.

Stomach or gastric ulcers (1) are shallow areas where there is a breach in the top layers of the stomach lining, leading to a sore.

Ulcers caused by acids are known as peptic ulcers, of which gastric ulcers are the most common type. Erosions are smaller and more superficial than ulcers.

Peptic ulcers are mostly caused by the overuse of nonsteroidal anti-inflammatory medications (NSAIDs) or an unresolved infection of the bacteria called H. pylori.

An infection with H. pylori triggers an inflammatory response in the body’s mucosal immune system, affecting the degradation of the epithelial layer cells. A similar mucosal injury is also caused by the use of NSAIDs through several mechanisms. (2)

These injured areas develop into peptic ulcers upon contact with gastric acid.

Most patients with a peptic ulcer are actually asymptomatic. However, the most common symptom when present is epigastric abdominal pain or a sharp pain generally between the belly button and the ribcage.

If the ulcer is present at the end of the stomach in an area called the pyloric channel, a blockage may occur due to the inflammation and swelling, and the following symptoms may manifest:

The patient may develop some severe symptoms that indicate underlying complications, including:

However, in some cases, the patient may even gain weight due to overeating in an attempt to prevent the pain from an ulcer.

The treatment for peptic ulcers is very straightforward. The first step is to stop NSAIDs, if medically feasible, or to treat an underlying H. pylori infection.

Next, rapid ulcer healing can be achieved with standard doses of proton-pump inhibitors (PPIs), which are more effective than H2 receptor agonists, antacids, or cytoprotective agents such as misoprostol. The treatment for an ulcer typically runs for 1–2 months.

It is possible for people to mistake normal stomach pain for ulcer pain, or vice versa. However, typically, the pain from a stomach ulcer feels sharp, burning, or gnawing and stays in one place (does not radiate).

It may also be described as a vague abdominal discomfort, nausea, aching, fullness, pressure, or a hunger sensation, and the symptoms tend to recur in episodes.

Various home remedies may help treat ulcers. However, they have not been established as efficacious treatments by any scientific studies.

While certain herbal supplements, such as Korean red ginseng, (3) ginger, (4) garlic, (5) and aloe vera, (6) have been suggested in the literature to have anti-inflammatory properties, they have not been tested in human subjects yet.

Therefore, you may try these remedies in moderation and with caution only if you are not allergic to any of the ingredients.

Contrary to popular belief, there is no evidence that specific foods or alcohol cause ulcers or that a bland diet treats ulcers.

However, certain dietary modifications can help reduce the symptoms of acid reflux, heartburn, and pain.

An infection with H. pylori and the use of NSAIDs is the cause of 80%–90% of ulcer cases. (2) However, the following factors can predispose you to develop peptic ulcers:

Smoking impairs ulcer healing. (10) It also contributes to the development of an H. pylori infection.

Therefore, smokers are at a moderately increased risk for peptic ulcers, and this risk is proportional to the amount smoked.

A high dose of steroids, in combination with NSAIDs, greatly increases the risk of ulcers, higher than that from NSAIDs alone.

It is found to have approximately a 2.4-fold risk for the development of peptic ulcers. (11)

Patients who had weight loss surgery, called Roux-en-Y, are at an increased risk of developing ulcers at surgical sites called marginal ulcers. (14)

Oral medications help to accelerate ulcer healing. However, without treatment, there is a risk of ulcer complication and non-healing.

While most ulcers will remain uncomplicated, 2%–4% have serious complications such as perforation and bleeding.

Perforation is suggested by sudden, severe abdominal pain that may spontaneously improve. The patient may also experience low blood pressure. Examination of the abdomen will generally yield a rigid and tight abdomen that is tender diffusely.

While it is commonly said that the intake of spicy foods leads to ulcers, infection with H. pylori and the use of NSAIDs are the most common cause of ulcers.

The symptoms of an ulcer are similar to those caused by GERD, non-ulcer dyspepsia, biliary tract disease, pancreatitis, and cancer.

Therefore, it is best to consult a doctor for the proper diagnosis and treatment of the symptoms. If found to have ulcers, you may be suggested to take PPIs, make lifestyle changes, and, in severe cases, undergo surgery.