Diastema is the dental term for a space between two teeth. This space often occurs in the front teeth, which are most visible when people smile. (1)

The gaps between your teeth rarely cause any discomfort, but they can ruin your smile and take away from your appearance. Thus, a diastema is mainly considered an aesthetic or cosmetic concern rather than a medical one.

How prevalent is diastema?

Baby teeth are smaller than adult teeth and can often be seen with large spaces between them. These primary teeth eventually fall out and are replaced by normal-sized permanent teeth, thus closing in the gaps.

But if the diastema persists even after the formative years, you can consult a dentist about getting it fixed.

Diastema in adults is also fairly common, which may be a continuation of childhood diastema or the result of dental trauma, periodontal disease, structural anomalies, or wrong habits. Some people are genetically predisposed to this condition as well.

What is midline or median diastema?

Diastema can be particularly noticeable if it occurs between the front two teeth or upper central incisors. This type of frontal teeth gap is known as midline or median diastema.

It can stick out and draw the observer’s attention, which can make you self-conscious while talking or smiling.

What are the causes of diastema?

The most common cause of diastema formation is the overgrowth of the labial frenulum, a soft connective tissue that attaches the teeth to the gingival lining.

This excess tissue usually develops between the upper central incisors and pushes them apart to create gaps.

The following factors can also contribute to gap formation:

Periodontal disease is an inflammatory process where the attachment of teeth to the bone is weakened. This can cause the affected teeth to move from their original position, opening up gaps between them. (2)

Diastema accompanied by pain is usually the sign of periodontal disease, which can be managed but rarely cured.

2. Misalignment of teeth and jaw size

Diastema can also occur due to a mismatch between the size of your teeth and jaw bone – that is, if your teeth are too small for the jaw bone, they are embedded in or if the jaw bone is too large for the teeth set it accommodates.

If your teeth are too small to cover the underlying jawbone or if the jawbone is abnormally large, the teeth tend to emerge at a distance from each other.

Certain abnormal habits such as thumb sucking in children or tongue thrusting in adults can give rise to diastema, particularly midline diastema.

The act of sucking on a thumb can exert frequent or repeated pressure on the upper central incisors, causing them to protrude outward.

The same thing happens when you compulsively push your tongue against the palatal interface of the front teeth to create pressure during swallowing.

The forceful bulging out of your front teeth can push them further apart and can create gaps between them.

Sometimes, a tooth gap is nothing but a space created by a missing tooth. In children, the gap created by the loss of a milk tooth is eventually filled by a new permanent tooth.

But if an adult tooth falls out, you may be stuck with this kind of “natural diastema” permanently.

Poor dental hygiene can also contribute to the development of teeth gaps. If you do not clean your teeth and gums regularly and properly, periodontal disease can develop, which is often a precondition for diastema.

In some cases, tooth extraction may create spaces between your teeth.

What is the treatment for diastema?

The most cost-effective solution to the diastema dilemma is to leave it as is. But people who are embarrassed by their teeth gap and want complete space closure should seek early treatment, especially when pain exists.

Spaces between adult or permanent teeth cannot be corrected without professional dental treatment, which includes:

The most common cause of diastema is an overgrowth of the labial frenum, a soft tissue protrusion between the upper front teeth that pull them apart. (1)

In such a case, the dentist will perform a procedure called a frenectomy to reduce the tension on the teeth by repositioning the frenum. 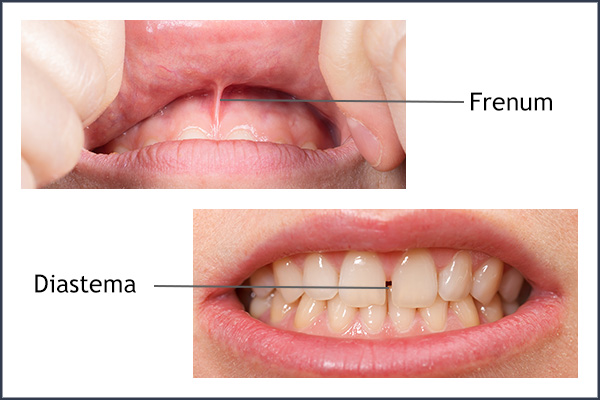 This is the most time consuming of all treatment modalities for diastema but provides excellent long-term results.

Dental braces are an orthodontic intervention that can help realign your widely spaced teeth and bring them closer together.

Braces are typically used to close in larger gaps, but they work well for mild cases of teeth spacing as well.

If you are not comfortable with metal braces as they draw too much attention, you can choose removable aligner braces or invisible braces, which are just as effective.

If you cannot afford orthodontics as they can cost thousands, ask your dentist to place white filling material on the teeth in question to help close the space.

If the space is too large, the teeth may need a harder full-coverage crown or partial-coverage veneer.

Although a crown and veneer are less expensive than braces, they can still cost upward of $1,000-$2,000 per tooth.

Here are important points to remember when seeking treatment for diastema:

How is diastema diagnosed?

Diastema can result from a variety of causes, each of which warrants its own specific treatment. Thus, your dentist will conduct a thorough diagnosis to identify the root cause of the problem and discuss possible treatment options.

The dentist will review your medical and dental history and follow it up with a close examination of the oral cavity.

This preliminary dental checkup is usually accompanied by a radiographic survey as well as an evaluation of the tooth and/or arch size.

These additional dental measurements are usually required when the dentist suspects malocclusion or misalignment of teeth and jaw size as the root cause of diastema.

Once the dentist has identified the root cause of your diastema, he/she will suggest the most effective corrective measures for that particular etiology.

Does flossing create gaps in teeth?

Flossing is unlikely to cause teeth gaps when done correctly. It helps you clean the cracks between your teeth and other hard-to-reach spaces in the mouth.

However, perfecting the flossing technique is very important, or else you will catch your gums in the thread, which can cause bleeding and gum recession.

A lot of people think rigorous or excessive flossing leads to extra cleanliness, but it only damages and erodes your gum tissue.

People who already have a teeth gap need to be extra careful when flossing and are generally advised to use a water flosser instead of the traditional thread one.

When to see a doctor?

Diastema is rarely a cause for concern that requires medical attention. But you can consult your dentist about possible corrective treatment if:

Diastema, or teeth gap, is not a medical problem in and of itself, but it can stem from an underlying condition that necessitates professional help.

It is usually a harmless dental anomaly that may have a bearing on your appearance but not on your health or well-being.

However, some people tend to take these aesthetic concerns rather seriously and are deeply affected by them. Some people find teeth gaps to be a fetching oddity, while others are embarrassed by it.

So, it all comes down to how you view this anomaly for it to warrant treatment or not. The treatment should be designed to meet the patient’s needs, demands, and expectations to ensure maximum satisfaction with the end result. (3)

White spots on teeth are visible when areas of the teeth are either whiter or reflect light differently than the...

Why Do Teeth Get Stained and How to Whiten Your Teeth

When thinking about whitening teeth, (1) it is important to know that what is a normal tooth color – a...

Know the Habits You Must Avoid While Brushing Your Teeth

Oral health is the window to your overall health. It is the major concern of dental health care professionals. Most...

Periodontal disease refers to a group of inflammatory conditions that damage the gum tissue, tooth ligaments, and underlying alveolar bone...

Plaque is essentially a slimy layer of oral bacteria that lodges on your teeth, gums, tongue, dental fillings, crowns, dentures, and the...

No Result
View All Result