A baby develops from a fetus that grows inside the fluid-filled cavity of the mother’s uterus for 9 months and therefore has no experience of breathing before birth. Plus, their lungs are the last to develop during this period of fetal growth and are not quite functional until after childbirth. 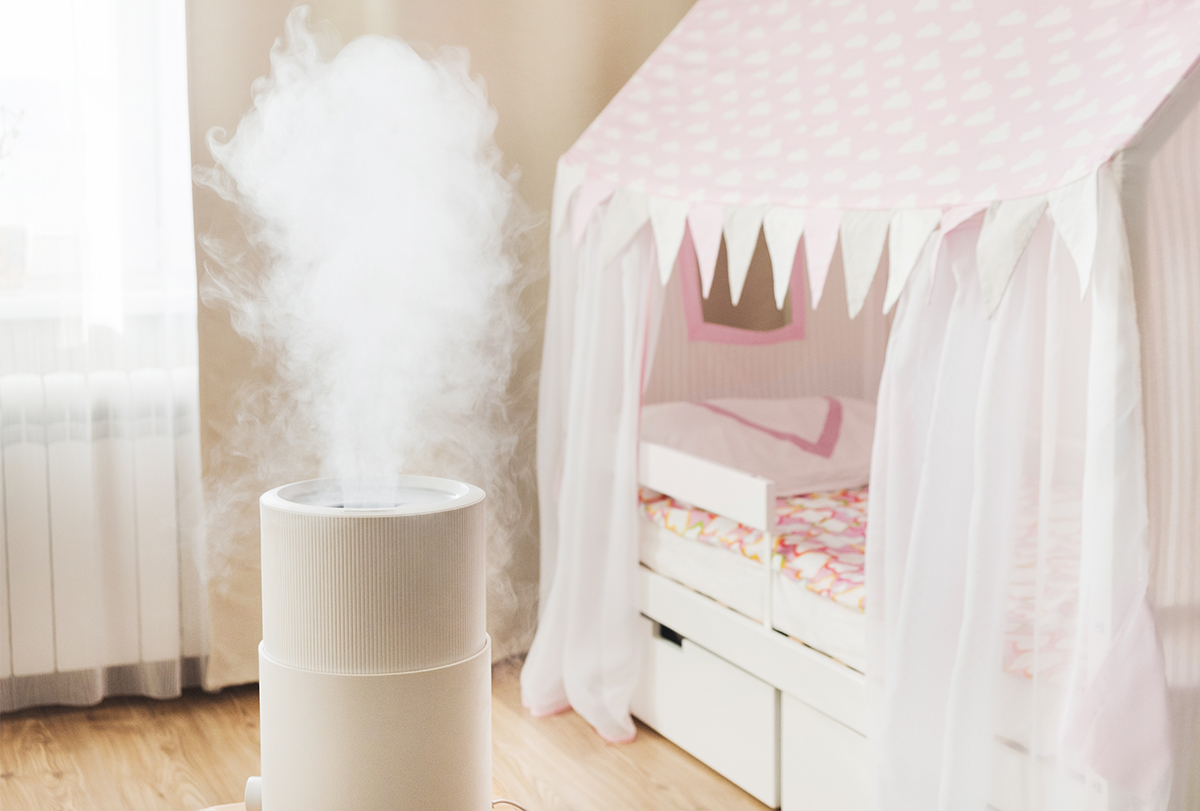 This journey from a fluid environment to an atmospheric one can overwhelm a newborn’s nascent respiratory system. Childbirth is when babies draw their first breath, so their lungs naturally take some time to learn and adjust to this process that was hitherto alien to them.

It takes months, even years, for an infant to attain a strong and stable respiratory function, more so if the baby had a premature birth with underdeveloped lungs. Thus, it is completely normal for infants to have erratic breathing patterns that stabilize over time as their lungs become accustomed to the new environment and get into the normal run of things.

They usually have a higher respiratory rate, which ranges from 20–40 breaths per minute, than older kids and adults. Plus, they may experience more alarming respiratory irregularities such as periodic breathing cessation for less than 10 seconds between rapid breathing spells.

While there is no need to panic, it is important to monitor your baby’s breathing during this adjustment phase to detect any serious respiratory distress as soon as it occurs. If you notice anything that is out of the ordinary or potentially a concern, consult your pediatrician immediately.

The common respiratory disorders in preterm babies include:

The respiratory disorders that commonly affect babies born at term include:

Some of these can be identified right away by the neonatologist and corrected appropriately (with medication, intervention, or surgery), and some may take some time to become more problematic.

Causes of Breathing Problems in Babies

Breathing disorders are largely associated with prematurity (3) as the lungs of the baby may not be completely developed at the time of birth. This doesn’t necessarily mean all premature babies will have weak or underdeveloped lungs, but there is more of a chance in these cases as compared to term babies.

Congenital defects can also be a huge cause of breathing problems in babies. Such defects commonly include:

Respiratory distress in babies can occur in the following ways:

Other symptoms that can point toward an underlying allergy or viral infection such as the common cold include:

Here are some effective ways to treat and manage breathing problems in children.

Giving steam to your baby or sitting in the steam room opens up the mucous membranes around the body and has been shown to improve breathing. (5)

2. Use a humidifier at a proper setting

A humidifier is a device that can impart some much-needed moisture to your arid indoor environment and thereby ease breathing when suffering from chest congestion.

Common colds and upper respiratory tract infections trigger excessive mucus buildup inside the breathing passages, which blocks the flow of air. In such cases, breathing in dry air can solidify the mucus and make the condition worse.

This is where humidifiers come in handy. They release moisture into the air, which goes into the respiratory passages and dissolves the consolidated mucus so that it becomes easier to expel.

However, there is a flipside. Too much humidity can cause accumulation of dirty mist and a variety of allergens in the air that can trigger or exacerbate your child’s asthma and allergy, sometimes even leading to pneumonia. Plus, it is important to keep the device out of your child’s reach as it can cause burns.

The United States Environmental Protection Agency (EPA) recommends keeping your indoor humidity levels between 30% and 50%. (6) Anything above 60% is considered too moist and can potentially hamper your child’s breathing.

Look for a device that has a built-in humidity meter or hygrometer, or install a separate one to maintain optimum moisture in your baby’s room.

Keep your baby well hydrated to thin down the mucus lining the respiratory passages and lungs.

Dehydration makes the mucus turn thicker, stickier, and more consolidated, causing congestion in your baby’s respiratory tract. This will not only make it more difficult for your baby to breathe but will also increase the risk of respiratory illnesses and allergies.

Vitamin D is mostly known for its bone-strengthening benefits, but this vital nutrient can play an important role in improving respiratory health as well. This claim draws credence from several studies that suggest high vitamin D levels correspond to better lung function. (7)

Conversely, researchers have found a link between low vitamin D levels and compromised lung function. For instance, a lot of patients with COPD are diagnosed with vitamin D deficiency and are therefore given vitamin D supplements to help their lungs perform better.

Plus, some studies have shown that a lack of vitamins C and D in the body can make one more susceptible to respiratory problems such as breathlessness, wheezing, and mucus buildup. (8)

Ginger has been used for years to relieve respiratory distress. It is known for its anti-inflammatory and antioxidant properties. Plus, it helps in boosting your baby’s fairly underdeveloped immune system.

According to one study, medicinal intake of ginger in recommended amounts can help the body in defeating the respiratory syncytial virus, which is a major source of respiratory infections in young children. (9)

You can give your baby a fresh piece of ginger to suck on or a homemade ginger tonic prepared by adding some ginger to hot water. Both these remedies can alleviate the shortness of breath caused by respiratory infections.

A powerful antioxidant in turmeric, curcumin may help fight the oxidative stress believed to underlie COPD, while blocking inflammation at the molecular level.

It helps dissolve the mucus accumulated inside the airways so that it becomes easier to expel. (10) This clearing of the airways helps relieve cough and allows better breathing.

Secondhand smoke can be just as toxic and deteriorating as smoking firsthand, especially for infants whose lungs are not as strong and developed as those of adults.

Some babies are prone to allergies, allergy-based infections, and asthma that can be triggered by allergens from certain pets.

Breathing animal allergens can make respiratory symptoms worse and can lead to a decline in the ability of the lungs to function. Touching or inhaling these allergens causes the immune system to overreact, worsening breathing problems.

Lots of pets, from cats, dogs, and horses to rabbits, hamsters, mice, gerbils, and birds, can trigger allergic asthma symptoms.

There are many other ways to help your baby breathe better, including the following:

It is important to identify the root of the problem and what may be causing the issue in the first place.

Prevention of Breathing Problems in Babies

Some breathing problems in babies can be out of your hands, such as prematurity and congenital disorders. However, you can actively be a part of your baby’s care and treatment regimen as decided by their pediatrician.

You can make sure they are receiving the accurate treatment and care as advised on the timetable suggested.

Seek medical attention if your baby has been sick or down for more than 3–5 days. Another reason is when your baby seems to be getting much more unwell or has a symptom that won’t go away with remedies.

Also, babies may have problems feeding and drinking and need to be checked by their pediatrician.

Seek urgent medical attention if your baby is showing the following:

Just as adults can suffer from a magnitude of respiratory issues and diseases, so can the little ones. Respiratory involvement and lung disease can begin as early as when the fetus is still in the womb.

Lung development normally occurs in five stages, and the earliest stage starts at 6–17 weeks of gestation. The lungs expand until 27 weeks when the surfactant (an important substance needed to keep the lungs inflated) is formed. They are fully functioning at around 37 weeks’ gestation, which is considered “full term.”

But some preterm babies born between 30 and 32 weeks, while still considered preterm, have at least a 99% chance of survival, and with the help of modern medicine, they can breathe better until their lungs learn to take over. Respiratory issues, therefore, can begin even before birth, soon after, and as your baby grows.