Home > Child Health > Conditions and Symptoms > ADHD in Children: Causes, Symptoms, and How to Manage

ADHD in Children: Causes, Symptoms, and How to Manage

Attention deficit-hyperactivity disorder (ADHD) is a chronic and incurable psychiatric condition that usually begins in childhood but can continue well into adulthood. It is characterized by an inability to focus or hold attention, stay in the same position for long periods, and exercise impulse control. 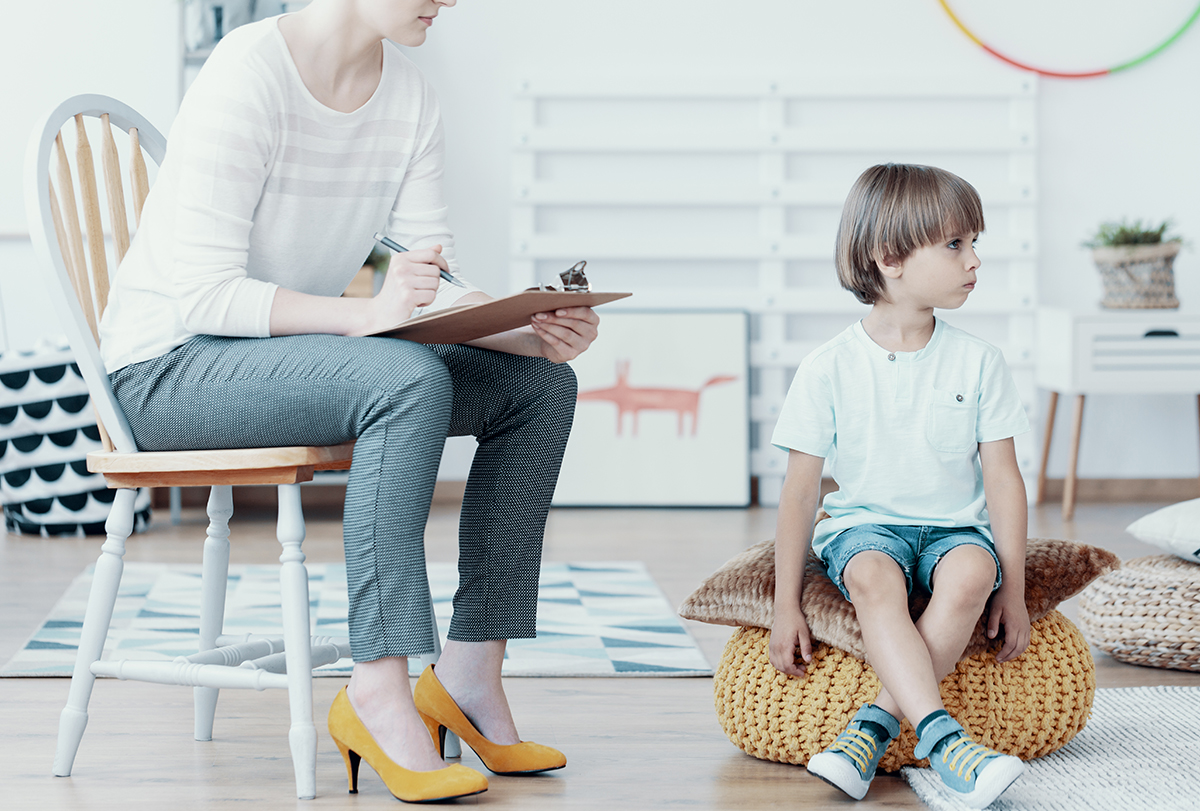 People who suffer from this condition tend to be hyperactive, forgetful, and easily distracted, which can make it difficult for them to accomplish personal and professional tasks.

Kids with ADHD may lag behind academically and be socially awkward, which can jeopardize their future prospects if these neurobehavioral tendencies are not managed properly.

This article sheds light on ADHD in children, some common symptoms, and ways in which the community – the child’s teachers, parents, doctors, and friends – can effectively help the child lead as normal a life as possible.

Types of ADHD in Children

But these different types were clubbed into one broad diagnosis of ADHD with three subtypes of predominantly inattentive, predominantly hyperactive, or combined. The diagnosis can have varying degrees of severity.

General Causes of ADHD in Children

ADHD is the result of disrupted executive functioning of the brain, which is responsible for self-control, adaptive thinking, planning and organization, time management, and working memory. All these mental skills are predominantly controlled by the frontal lobe and allow you to learn, grasp and retain information, follow directions, and regulate your emotions.

Without proper executive function, you won’t be able to perform optimally at work or in academics and you may find it difficult to interact, communicate, or bond with others. This kind of disability can therefore have a negative bearing on both your professional and personal well-being. (1)

ADHD is a genetic disorder and most of the time it is simply inherited. There are other diagnoses, such as Down syndrome and autism spectrum disorder (ASD) that have ADHD as a common comorbidity. (2) That is, if you have these diagnoses, you are more likely to have ADHD than the general population.

Some Common Symptoms of ADHD

Children with ADHD have a persistent pattern of inattention and/or hyperactivity. While most children have a combination of the inattentive and hyperactive symptoms, some children can have predominantly one category of symptoms over the other.

There are 9 items in each category of inattention and hyperactivity, 6 of which need to be satisfied in addition to the symptoms being present in the child before the age of 12 years, be present in two distinct environments (like school and home), and must be severe enough that they are interfering with everyday life.

Finally, a doctor should make sure that something else doesn’t explain the symptoms being seen, such as schizophrenia or another psychotic disorder. (1)

Some examples of the inattentive category are:

Some examples of the hyperactivity category are:

Note: While it may feel that most children fit some of these items, it is the extent to which the symptoms affect their daily life and how much of the symptoms they can control that distinguish them from “just being a kid” and having ADHD.

Managing the Symptoms of ADHD

Early diagnosis of ADHD is key in the management of symptoms and allowing the child to enjoy their life.

Having a good medical team in the form of a therapist/psychologist and perhaps a doctor who will prescribe the medication, such as a developmental-behavioral pediatrician, general pediatrician, or psychiatrist, is vital in ensuring correct diagnosis and appropriate medication management.

Once the diagnosis has been made, the following ways can prove useful in managing the symptoms of ADHD (of course, prioritization will depend upon the severity of the symptoms and your doctor’s suggestions):

Cognitive-behavioral therapy (CBT) is the primary way to instill long-term coping skills for the child’s behaviors. (5)

Medication, often in combination with CBT, can bring meaningful change to the child’s life relatively quickly. It can help the child start to understand themselves and also the parent to understand that their child isn’t just “being a bad kid and needs more discipline.”

Stimulants such as methylphenidate and amphetamines (6) are the standard medication for treating ADHD. These drugs are completely safe for both children and adults, provided they are taken in the right dosage and manner.

Nonstimulant medications, namely, atomoxetine and guanfacine, are prescribed to those who do not respond well to stimulants. (6)

Effective parenting is also a must for proper management of the child’s symptoms, and the following are some points to bear in mind:

There are numerous resources that explain ADHD and give tips and tricks for managing symptoms while not constantly punishing children for their behavior. Early diagnosis and appropriate management allow children to develop tools for minimizing how their symptoms affect their school and personal life.

Adults, with appropriate support, can often harness their symptoms and turn them from a problem to a strength.

Can ADHD be left untreated?

For mild cases, the child can often overcome their symptoms and develop coping mechanisms by trial and error. However, moderate to severe cases often cause significant harm to the child’s development to leave ADHD untreated.

Teenagers and adults with untreated ADHD have higher rates of dropping out of school, (7) earlier drinking and drug use, (8) car accidents, other oppositional behaviors and diagnoses, and anxiety and sleep issues. (9)

Is ADHD a form of autism?

No. ADHD is a separate diagnosis from autism spectrum disorder (ASD), but children who have one can have the other. In fact, ADHD is one of the most common comorbidities of ASD.

Can one suffer from ADHD in adulthood?

Yes. ADHD is a lifelong condition that typically affects children and continues through their adult years and old age. (10)

But early-stage ADHD may exhibit mild or no symptoms and go undetected for a long time. This, combined with the general unawareness regarding mental health, keeps many adults with ADHD oblivious of their condition. They may experience the standard signs of ADHD but dismiss them as normal human errors.

So, it is important to educate yourself about the characteristic symptoms of this condition and seek medical counsel if you experience them on a regular basis.

The doctor will conduct a comprehensive evaluation of your medical history as well as current and previous symptoms, take inputs from your close relatives, and use adult rating scales or checklists to make a proper diagnosis.

Can ADHD be cured?

There’s still no permanent cure for ADHD, which persists throughout one’s life but can be effectively managed through a range of therapies. Depending upon the severity and type of ADHD, the doctor will recommend the appropriate medication and, if needed, behavioral interventions as well.

What dietary changes should be made for a child suffering from ADHD?

There is no evidence-based data that connect any specific foods to symptoms of ADHD. No dietary changes need to be made.

What are the common ADHD triggers?

There are no “triggers” for ADHD. ADHD symptoms are constant in a child’s life, and inappropriate management of these symptoms can make their behaviors worse.

Does ADHD worsen with age?

Untreated ADHD symptoms can worsen with age, especially after retirement when the patient’s schedule suddenly changes. The job brings a kind of structure and stability to their daily life as they have to adhere to a daily timetable.

But when the patient becomes unemployed, the timetable becomes much more fluid, which can rekindle their inherent ADHD tendencies of procrastinating, impulsive behavior, and hyperactivity. This loss of control over their life can induce anxiety or guilt, which can further disrupt their already-compromised mental and emotional space.

It is most important to understand that there is a lot of stigma and misinformation about ADHD and especially treatment for ADHD. Simply disciplining the child more or ignoring the symptoms is not the way to manage it.

Parents must first educate themselves on ADHD by using evidence-based resources and then understand how to become their child’s support system and advocate for their child rather than “fix” them.

Symptoms of ADHD can be harnessed into strengths if managed appropriately. There is nothing wrong with a child taking medication for their symptoms for the short or long term if it helps them function better, but of course it must be done with care and with a provider that is systematic in their approach.

If you suspect ADHD in your child, go to resources such as the Centers for Disease Control and Prevention (CDC) to learn more, and when you are ready, go speak with your pediatrician about it. The earlier ADHD is diagnosed and managed, the better.